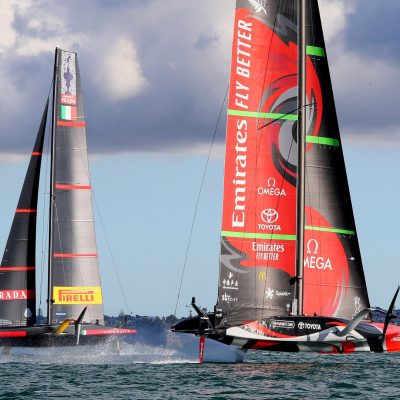 After Day 1 and Luna Rossa’s narrow victory against Te Rehutai in Race 2, the myth of the Kiwi boat’s dramatically superior speed was exploded.

So Race Day 2 which followed a lay day during which I am sure both teams will have analyzed their own performance and that of their opponents to the n’th degree Day 2 promised to be very revealing.

Would the Italians extended their (short) run and disappear into the distance on the score board or would New Zealand stop what some were already starting to call a rot (shame on them). The light air which has consistently been reported to be the Northern Hemisphere team’s strength was in evidence with the wind only a few knots above the lower wind limit so it looked like being a good day for Spithill, Bruni and their crew.

The start of Race 3 had the Italians in the windward position but ETNZ initially seemed able to hang in there but by the top gate it was Luna Rossa ahead in clear air by just 5 seconds. The gap grew and by Gate 4 the Italians had extended to over 20 seconds further extending to reach a delta of 37 seconds by the finish. Considering the rumored preferred wind strength of each of the boats it looked like the Italians were going to head to a double header on this second race day.

Between races the Kiwis were in huddled in a bit of a council of war and at the second start of the day it looked like the Italians went for a hook but were not really close and the boats came off the line in very similar positions to the previous race possibly bringing groans from the spectator fleet but this time the Kiwis were able to hang in and extend putting dirty air on Luna Rossa forcing a tack away by the Italians. This time it was the Kiwis in control with a nice lee bow tack when the boats came back together forcing Luna Rossa back out towards the right helping to take them to the top mark for the first time a few seconds – next to nothing really (1 mistake territory) – ahead.

Down that first run (is it really ever a run for these boats?) the lead stretched out to around 200m.

The rest of the race was pretty comfortable for Te Rehutai made all the more so by a fluffed gybe where the new foil was not deployed quickly enough which, it was found out at the press conference by Francesco Bruni missing the button (he said at the press conference) with the lead at one point being as much as 800m.

The commentary team of Steve, Kenny, Nathan & Shirley did their usual good job (Nathan yes, the others just seem there to fill up space and Read babbles too much. – ed) and of course we sailors must remember that much of the chatter is not for us but for the landspeople.

So two days in and it is all square at 2 wins apiece. If there is a slight edge it appears that the ETNZ wins are a bit more convincing and when they are able to get their nose in front they seem to be able to extend easier than Luna Rossa are able to do.

Forecast tomorrow is again for lighter breezes and the course currently is a mystery. Will we be back on the same one with its relatively steady breezes or will there be a shift to a stadium course where the winds may shift more and the racing be a bit more dynamic – we will have to wait and see. – SS