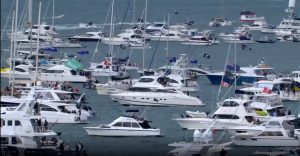 They used to call it an America’s Cup Summer in Newport back in the day. Well it looks like Auckland has rightly inherited the title as COVID or no COVID, Level 2 or not, the harbour was packed with spectator boats and with limits of gatherings in one place of 100 the Royal New Zealand Yacht Squadron opened up all its rooms with up to 500 people spread through the various parts of the area.

So packed were the spectator boats that one of the first challenges off the competing teams was to weave through the fleet under tow to reach the race area.

COVID or no COVID Aucklanders appeared determined to support their team, whether defenders or the challengers with some spectator boats sporting flags of both nations, a kind of nod to the Deed of Gift’s “friendly competition between countries”.

Which boat would be quicker? Emirates Team New Zealand’s Te Rehutai or the Italians Luna Rossa Prada Pirelli?  The rumours of superior boat speed for the Kiwi boat had been rife with reports all the way up to an unlikely (and those in the know stating impossible) 62 knots would mean the Italians would be able to do nothing. More rumours than one could keep up with many of them instantly dismissible. It would all be meaningless 2 minutes after the first boat entered.

Luna Rossa clearly would be more race ready having had t come through the hard way, Round Robin where they had their hat handed to them by INEOS, a semi-final against a ‘wounded’ American Magic and a Prada Cup final where a raft of improvements allowed them to reverse their fortunes against the British taking out a 6-1 win. AS Ken Read put it, certainly ‘race- hardened’.

ETNZ on the other hand had not raced another AC75 since before Christmas being limited to practice starts against their chase boat. Both teams of course, will not have paused in their continuous development both in straight line speed and getting through the tacks and gybes.

Race 1 went to Burling’s Boys on the ore colourful boat which after winning the start, sailed over the top of the Italians leading to what most of the commenttors agreed was a desperateattemt at a luff and protest which one could describe as a ‘swing and a miss’ allowing the Kiwis ot sail away while LRPP was forced into a tack. ETNZ then spent most of the race extending to around a half kilometre or 31 seconds by the finish.

In Race 2 the Italians reversed the situation at the start and gradually extended while pinning the New Zeaand boat over towards the left hand side of the course and for the first two laps (4 legs) gradually appeared to extend. About half way up the 5th leg Te Rehutai appeared to light up a bit and gradually wore LRPP down to finish just 7 seconds down on the Italian boat.

Why? Did they find a different gear? Did LRPP ease off? Did the wind speed change more in favour of the Kiwi set up? Did they pick up a wind band? Did the Kiwis shake off some of the ‘ring rustiness’? We won’t know on the showing of just one day and two races.

One thing is likely it that Spithill, Bruni and the Italian Team are probably as already race hardened as they will be, they have had way more actual race time while the Burling, Ashby, Tuke and the rest of them have a much greater opportunity to climb a curve.

Speculation apart however, unless the New Zealand team were easing themselves into the series (some might call it sandbagging – really?) the huge speed advantage that so many pundits speculated (it could be no more than speculation) that Te Ruhutai had really wasn’t apparent in todays conditions.

Going forward to Race 3 & 4 if the Friday forecast is correct with the wind going lighter may favour Luna Rossa while if the wind peps up just maybe the other way – any comment one way or the other would be a pure guess.

We will only know in (as I write this) in around 22 hours time. Personally, I think saying whether it will be Bruni lifting the cup in 6-11 races time would, right now, be no more than a guess.

Not much in the way of drama.   It did appeare in the pre-start but the counter argument of lack of match practice for Peter Burling’s crew was put to rest as the two boats approached the start line with he Kiwis in a dominant position.

A short while later Spithill threw in a luff which was matched degree by degree by the Kiwis with once again the Italian protest light coming on while still altering – he really should read Rule 16. – SS