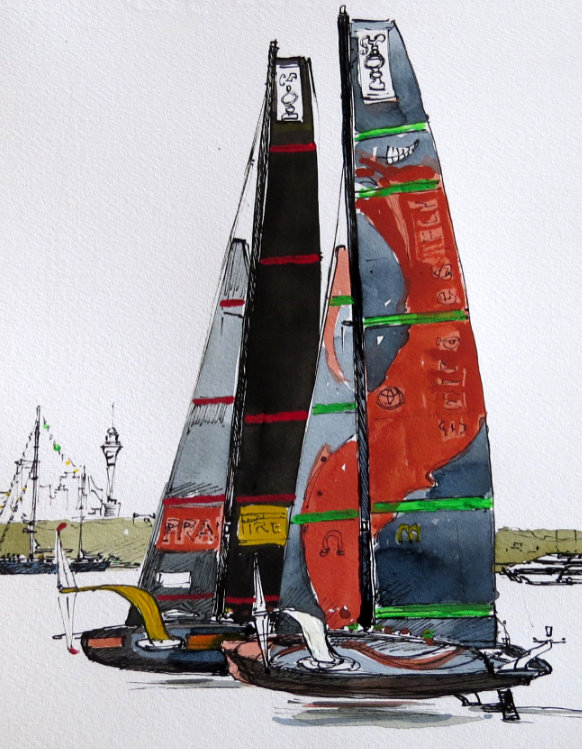 We Love this work from Pete Hogan.

The America’s cup has been a fruitful source of inspiration for marine artist over its 170  year history.

Even if I could have, I don’t know that I would have rushed out to Auckland to see it, had such a strategy been an option.  But certainly a lot of people in the world would have.  From cruise ships to superyachts to plain tourists, Auckland was banking on a big splash this summer.  Auckland would have been the centre of the yachting world for these two months and the people of New Zealand would have considered that the sponsoring of the event to the tune of $240 million ($200 on infrastructure and $40 million on entry fee) should have produced a few tourists to visit NZ.  But Covid was not part of the calculations.

Locked down here in Dublin and glued to my computer watching the excellent coverage coming out of Auckland I had ample time on my hands to be inspired to paint pictures of these exotic flying machines. I had some early success.  I posted a picture on the Kudos board of American Magic camp wishing them well and had good wishes and a sale of one of my paintings to a fan in Georgia.

In days of yore, your bog standard marine artist would have used models of ships to set up their compositions of great sea battles or shipwrecks. It was only he likes of the great JMW Turner who would tie himself to the mainmast so that he could sketch in stormy weather. Then along came photography and everything changed.  Marine artists, like their horse painter equivalents, would have used whatever photos they could have got their hands on.  Nowadays, anything goes. For the marine artist photos are an essential input when plying ones trade.  Above is an example. – Pete Hogan.