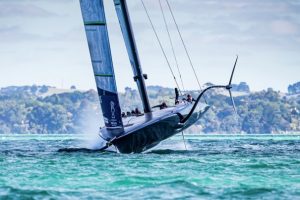 Is that a Zen koan? Sadly, it is not. The American/New York Yacht Club challenger for the world’s oldest sporting trophy’s current holder, Emirates New Zealand, was eliminated early on.

Three countries and their teams were competing in the 36th edition of this event, and this time, their goal was to oust New Zealand on their home waters on March 6. The challengers were the aforementioned Americans, plus the British and the Italians.

After a few weeks of intense sailing competition for the qualifying Prada Cup, the Italian boat Luna Rossa, sponsored by luxury brand Prada and tire maker Pirelli, left the American boat Patriot and the British entry Britannia 11 in her wake. The America’s Cup (AC) is thus between the Italians and Emirates’ New Zealand team.

This is the fourth time in the entire 170 years of AC competition that the Americans did not make it to the finals. Read on, thanks to Worth.