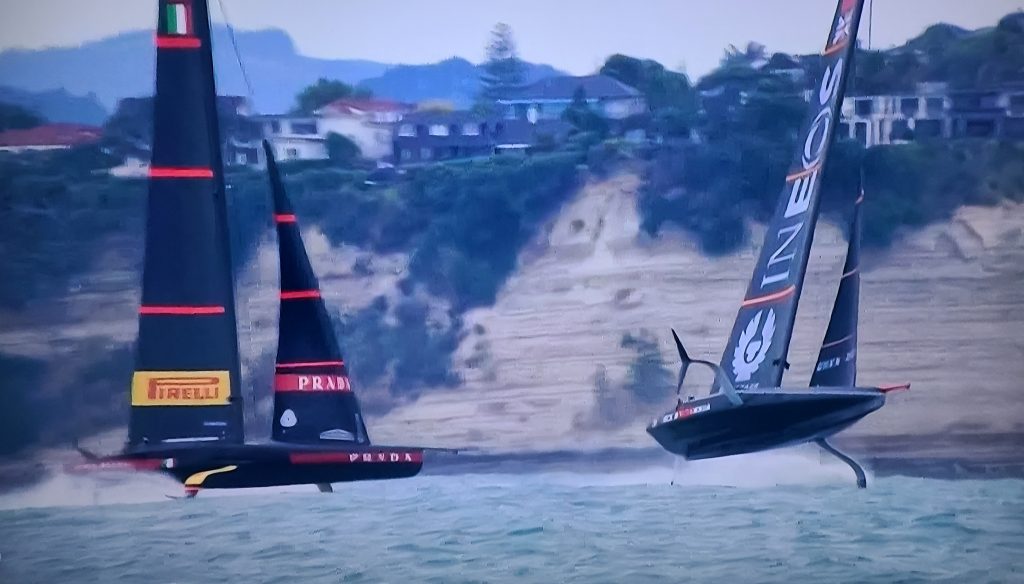 First, let’s talk about the broadcast. The over-long intro to these races is tedious, and now NBC has decided to add another layer of blah blah blah, putting a non-sailor “news man” type to anchor the new lead show with Tom Burnham (who somewhat awkwardly does all the talking).  They then throw it to Kenny and company to call the race.  And where the hell was Nathan in race #1, he’s the best of them all and he was hardly even present. Like many things with NBC, they are blowing a chance to give their audience the perspective of a guy who is not wrong often. And people like Nathan and like to hear what he has to say.

As for the racing, Jimmy Spithill has now beaten Sir Ben three straight starts, and three straight races, and in race #3, Prada continued their pattern from day 1, and are faster, better sailed, and just so much slicker, resulting in a dominant and controlling win.

Are ya seeing a pattern here? This is looking like a rout. Heading into race #4, Sir Ben HAS to win the start. If he fails, the odds of winning are not good… Again, props to my drunken photo skills for another amazing pic – bahaha. – ed.

Sleepy Ben once again got his ass handed to him by Jimmy and team at the start, embarrassingly bad.  I don’t get it – the Fracksters are sailing with no urgency, not aggressive and never, ever getting in front. Oh and then the Brits did the picture at the top. Prolly not a winning move.
I just looked at the TeeVee and the pomes are 178 meters behind. Wake me up when something changes….
Nothing did.
editorFebruary 13, 2021
Leave a reply

all about the olympics