where the rubber meets the…sea? 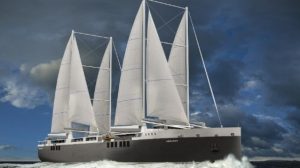 France’s Michelin Group joined a growing number of global brands committing to use a sail-powered carbon-free shipping alternative for its products. Michelin announced that has signed a letter of commitment for maritime transport of containers of its pneumatic tires aboard NEOLINE, the French start-up that plans to build two cargo ships that will use sails for their main propulsion.

Calling it a “test initiative to help decarbonize Michelin’s logistics operations,” the French manufacturer committed to the transportation of containers of its product from Halifax, Canada to Saint-Nazaire – Montoir de Bretagne, France as soon as the first cargo sailboat is commissioned. NEOLINE plans to open its transatlantic service with a first vessel in operation by 2023 and a second vessel scheduled a year later. Michelin committed to gradually growing its business with NEOLINE to at least 50 percent of the group’s containers transported on this route. Read on.