throw down the gauntlet 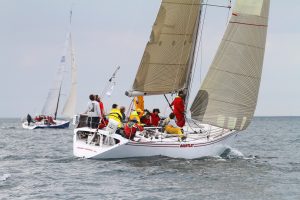 Apparently when we posted a couple pictures and words  from Scott Kaufman about the destruction of his design Gauntlet, pictured left in happier days, there was a bit more to the story…

I have been directed to your article concerning Gauntlet.

I have been with the Great Lakes part of the Gauntlet story since it was brought up here in 1994 from New Orleans and in 2002 became Program Manager for the owners until her scrapping. So I am intimately involved with the Gauntlet Program. In fact there is no one who know that boat better then I in that time frame.

I am very disturbed at the comments (by Scott Kaufman – ed.) that “where I guess someone didn’t pay the yard bills for a few years and you see the results“. THIS IS DEFINATELY NOT WHAT HAPPENED!!!

Scott had to have gotten pictures off our facebook page – If he would have been a little less lazy and read my explanation and looked at the video I posted he would have known that the hull was cracked in two places over 4 feet long through each row of keel bolts. Marine engineers said metal fatigue.

The estimate to fix her and do a new motor (the original Mercedes diesel was in her) and fix some other issues would have cost $150-200,000. Didn’t make sense financial sense. Scott knows who we are and has our number as we have had several conversation in the past with him about the boat. He could have called if he was too lazy read our Facebook page

The cracks developed during the 2018 Bayview and Chicago Mac races. and by the time we were got her home the bilge pumps could barely keep up with the water coming into her. In the fall of 1994 we literally dug that boat out of Lake Pontchartrain. She was full of water and mud, big barnacles growing on her and in horrible condition. We are the only reason that boat was not scrapped much earlier. We spent significant funds to completely rebuild her and then as much as possible update her.

Gauntlet was LMRSF boat of the year 6 times, we won our class 3 times in Chicago to Mac, second overall corrected one year, several seconds and thirds in class. We were first overall in the Chicago NOODS in 2005 and I could go on and on,

We took very good care of that boat and spent much money and time to take care of her and keep her competitive. The boat was sold to Torrensen to do with her as they wished. in early 2019

I hope the truth of what really was the cause of her scraping is given as much prominence as Scott’s false narrative.  – Anarchist Michael.