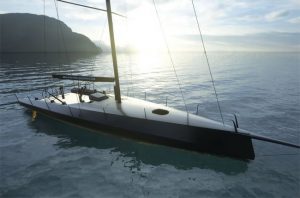 At Fibre Mechanics in Lymington there is a new 50-footer in the making that the UK-based company thinks could spark interest among those interested in a broader range of IRC racing.

Designed by Carkeek Partners, the new CF520 was commissioned by Oyster founder and serial raceboat owner Richard Matthews who had a clear idea of what he was after for Oystercatcher 35.

‘I had a Humphreys 54 a few boats back which we really enjoyed racing, followed by a Judel Vrolijk 42 and a Humphreys 39 which were all good boats,’ he explains. ‘After that I bought Piet Vroon’s Ker 51 Tonnerre which I had for a season. This boat reminded me that I quite like that size because it brings a level of comfort, if you can call it that, to offshore racing. As it happens, I had sold this boat not long after I had bought it, so I knew we only had it for a season, but we enjoyed it that much that it set my sights on another boat of this size.

Sailor Chick Of The Week