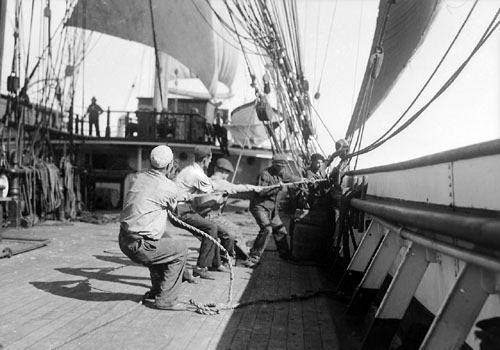 “SHANTY or CHANTY (in either case pronounced ‘Shanty’). Many folk songs survived in the sea-life of sailing ship days. For amusement the sailor sang songs rhythmically fitted to seafaring processes. Thus was attained unanimity in pulling ropes or pushing the capstan, and thus, at the same time, was work turned into a kind of game. ‘The Rio Grande’ and ‘Blow the man down’ are examples of well-known shanties. But there was always the element of extemporization in shanties, at all events as to the words, and they offered a recognised and tolerated occasion for letting the captain know of the good and bad parts of the ship’s commissariat and the like.” –

(The tradition of seafaring shanties – essentially work songs – was also adopted by the river boat crews of the Mississippi and lumberjack teams in the Michigan and Wisconsin forests. Many ribald words and thoughts found their way into the shanty but only in the quiet solo verses, not the chorus, which was louder and could be heard by the passengers.)