It is hard to believe this kook is back, and with something even more absurd than his previous absurdities. Check out the 305 page thread on this weirdo. The thread, “Couple cruise for 1,000 days” is now unlocked, should you wish to comment! 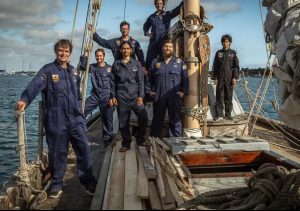 It is the first of what Stowe hopes will be many ventures made to further psychological knowledge needed to get humans to Mars. The reasoning goes that astronauts must develop specialized mental skills to deal with what in all likelihood will be a grueling trip to get to Mars and back, Stowe said. He thinks the similarities between seafaring and space exploration are numerous.

“Put (astronauts) at a small boat at sea, six of them that are going to go, and they will learn things about each other while they’re surviving in those conditions,” Stowe said. “And that’s what we’re offering with our Mars Ocean Analogs.”

Read on thanks to The Palm Beach Post.  Photo by Thomas Cordy/palmbeachpost.com.