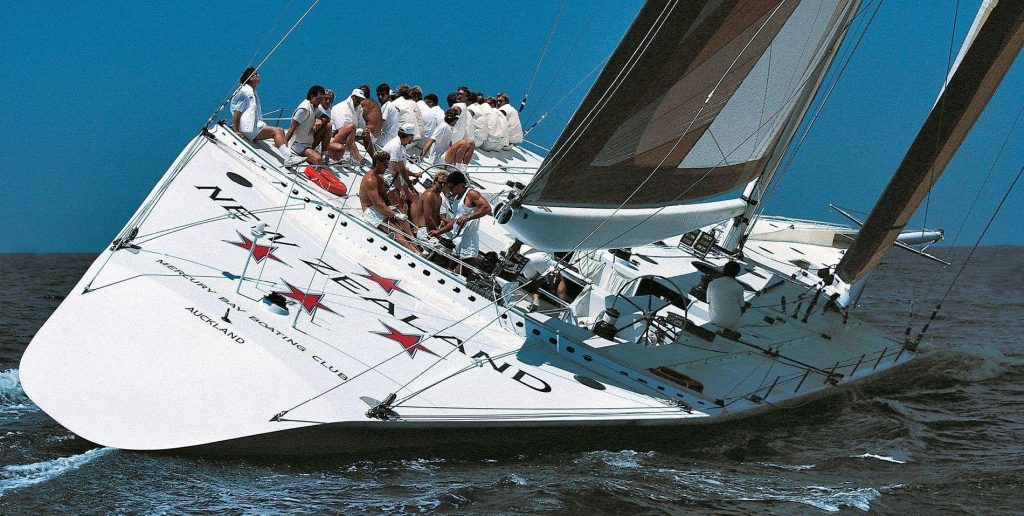 The current kerfuffle over the legal standing of a challenging club (or is it company?) is just another chapter in the long history of America’s Cup disputes.

Allegations of rule-bending, deception, skullduggery and outright cheating have been a persistent characteristic of the event for more than half a century. The syndicates often spend more time in the courts, in arbitration and the protest room than racing against each other on the water. Indeed, that combative, litigious tradition is part of what makes the modern America’s Cup unique.

The founding Deed of Gift, notwithstanding its fine sporting intent when drafted in 1852, must take some of the blame. Passages of its archaic wording are so ill-defined that any smart lawyer can now steer a fully-rigged schooner through the loopholes.

But rules are only as good as the honor and honesty of those purporting to play by them. When, after WWII, it was agreed that the Cup should be contested in 12-metres it didn’t take long for suspicions of sharp practice to emerge.

Flotation is a key measurement component of the meter rule and affects the crucial ratio of keel weight to displacement. The more of a boat’s total mass that can be placed down low the better it should sail.

So when a crewman of the 1967 Australian challenger Dame Pattie noticed people taking equipment off Intrepid before the flotation measurement – including all the heavy winch drums – he reported the incident to his skipper. There was a protest, and Intrepid had to be re-measured with its racing equipment in place.

There was an apparently similar issue over displacement in the Southern Cross v Courageous match in 1974. The American defender won in four straight races, but when Ted Turner later bought Courageous he discovered that it didn’t measure as a 12-metre. Turner then had to spend considerable time and money having the boat modified to qualify under the 12-metre rule before the 1977 defense.

1983 saw the active entry of lawyers in the America’s Cup, and legal battles tainted the event for the next 20 years or more.

The New York Yacht Club argued in the Supreme Court that the winged keel of Australia II rendered it not a proper yacht. Further, they argued that the boat was really created by a Dutch naval architect, not the Australian Ben Lexcen. (How quaint that objection seems today with nationality irrelevant and AC teams recruited from anywhere.) The court dismissed the NYYC arguments and Australia won the Cup.

Enter New Zealand. The Kiwis ruffled feathers from the outset, turning up in Fremantle in 1987 with a fiberglass 12-metre. Dennis Conner was quick to give the media his opinion that, as nobody else had built their boats from GRP, the New Zealanders were probably cheating.

That animosity was heightened even further after Stars & Stripes regained the Cup from Australia and NZ millionaire Michael Fay immediately issued a challenge under the old Deed of Gift conditions. He’d already secretly commissioned NZ1, a design from Bruce Farr for a giant 90’ waterline sloop (120’ LOA, plus bowsprit), and insisted that the series would have to be sailed the following year.

It was clearly an ambush. The defenders, the San Diego Yacht Club, were expecting to race in 12-metres – and not for three years. They first tried to thwart Fay’s challenge in the courts, claiming that the Mercury Bay Boating Club in New Zealand was not a genuine “arm of the sea” club, and that Farr’s monster yacht was not within the spirit of the competition.

The courts sided with the Kiwis on both counts, so San Diego responded in kind. If the only restriction was to be a maximum waterline length of 90 feet, then their defender would be a lightweight 60’ wing-masted catamaran. Dennis Conner steered that cat to an easy 2-0 win. At the final media conference he told the NZ designer Bruce Farr, “I had a cat, you had a dog.” Ouch.

But the tiny island nation deep in the Southern Hemisphere was undeterred. New Zealand is now contesting the Cup for its tenth time since 1987, having already won on four occasions. It is a remarkable record.

And it seems they can bear a grudge for a long time.

After the 1988 mis-match the victorious US catamaran Stars & Stripes was taken apart and the components dumped and forgotten on top of shipping containers in a far corner of a San Diego boatyard.