And who said the America’s Cup doesn’t pay? 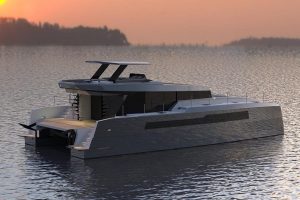 “Working together with McConaghy Boats and Ker Design, we have developed this exciting fuel efficient semi-foiling power multihull,” Dalton said.

The shipyard confirmed the build is in progress, though no more details have been released about the yacht yet. More information is expected later this Spring. In an interview with Asia-Pacific Boating, McConaghy Boats’ Group Managing Director Mark Evans said he was confident that hydrofoiling would become more prevalent in yachting in power or sail, as technology from the America’s Cup filters down to the mainstream market. Read on.

Check out the brochure here.