If you ever had any doubts about what a complete asshole Donald Trunt is, here’s example #1, 794,721. That this lying criminal hates the environment is obvious, but this? All of you who still support this sub-human can fuck right off. 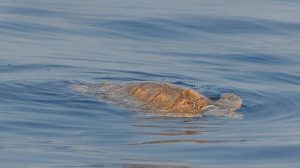 President Donald Trump has vetoed a bill that would have phased out large-mesh drift gillnets in federal waters. In his veto message, he suggested that the bill would increase reliance on imported seafood, worsen the trade deficit and “not achieve its purported conservation benefits.”

Driftnets are prone to a high rate of bycatch, including protected marine mammals and sea turtles. In the U.S., the nets are used exclusively by about 20 vessels to catch swordfish and sharks in federal waters off the coast of California. Swordfish is the primary target species, but it only accounts for about one out of eight animals caught by the nets, according to the nonprofit Turtle Island Restoration Network. An estimated two thirds of all animals caught are discarded, including about 60 whales and dolphins per year – more than all other West Coast fisheries combined.