a freak gust of wind 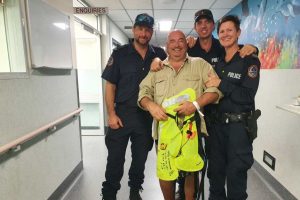 A man sailing alone in the Arafura Sea has been rescued in rough conditions eight hours after he was blown overboard from his 10-metre yacht. The sailor was wearing a life jacket with a personal locator beacon (PLB) when he fell into the water after being knocked over by what he described as a “freak gust of wind” and could not make it back to the vessel before it drifted away.

The beacon on his PBL alerted the Australian Maritime Safety Authority (AMSA), who advised water police in Darwin at approximately 9:30am on Monday of the distress signal, located 93 kilometres northeast from the remote Northern Territory town of Nhulunbuy.

In a joint operation, NT Police and AMSA worked in poor weather conditions and heavy seas to reach the stranded yachty. AMSA deployed a fix winged aircraft from Cairns and police in Nhulunbuy launched their rescue vessel with three crew.

The man was located by the AMSA aircraft 23 kilometres from his yacht and the crew dropped down a life raft, where he was able to make radio contact. Due to his location, it took police five hours to reach the man and he was then transported to Gove District Hospital. More here

the jury is in

need something a bit stronger…