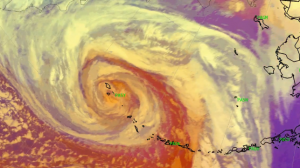 On New Year’s Eve, the far western reaches of the Aleutian Islands were rocked by the most powerful storm ever recorded in the North Pacific, with windspeeds equivalent to a Category 1 hurricane.

Two days in advance, the National Weather Service issued a warning for all waters between Atka to Adak for waves of 40-50 feet, hurricane-force winds and gusts up to 85 miles per hour. As the storm passed over, an ocean buoy at Amchitka Island recorded significant wave heights exceeding 58 feet.

The New Years Eve storm passed directly over Shemya, a U.S. Air Force island base located some 700 nautical miles to the west of Dutch Harbor. The weather station at Shemya recorded a low pressure of 924.8 millibars, setting a new record low for sea level pressure in the state of Alaska. The previous record was set in Unalaska in 1977 when a ship recorded a low of 925 millibars. Read on.