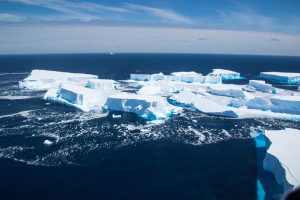 Britain’s Royal Air Force released new images of the world’s largest iceberg reporting significant changes confirmed by the British Forces South Atlantic Islands (BFSAI) during its routine patrols of the region. Using an RAF Airbus 400M the crew was able to investigate and photograph changes to the berg known simply as A68a.

Confirmed by recent satellite imagery and overflights by the RAF, the berg is believed to have grounded on the oceanic shelf as it approached South Georgia island and has begun to break apart into several large sections.

BFSAI reports that as the current around South Georgia spun the iceberg, a large section broke off. A new section estimated to measure approximately 55 square miles calved from the northern section of A68a and has now been designated A68d. It is currently approximately 30 nautical miles away from South Georgia.