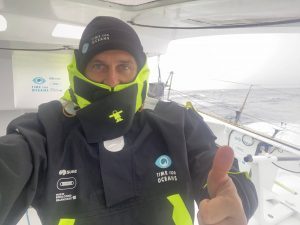 Strategies are now diverging significantly between the leading two skippers Thomas Ruyant and Charlie Dalin at the front of the Vendée Globe fleet. Ruyant has split north to seek a low pressure system first, looking to reap the rewards of a fast downwind ride after the weekend but he must sail many more miles – some of them at an oblique angle to the best course east – and some of them potentially upwind into 25-30 knots of wind.

While third placed Thomas Ruyant has now dropped to be over 300 miles behind leader Bestaven, as the distance to the finish line dropped today to be less than 10,000 nautical miles, so it seems that Dalin might be rewarded by returning to the race lead on Christmas Day, by virtue of his more direct course.

Dalin said today, “The situation is tense, we’re trying to escape from the high-pressure bubble and trying not to get swallowed up, but depending on the weather models, we could get through or we might not. It’s not easy on the nerves to deal with.”

“What is certain is that my decision was taken based and supported by my initial position to the south. Going north meant drawing a “huge circumflex accent” (an upturned V) in the Pacific and my southern route I think means a better chance of finding a favourable outcome. But I decided to dare, to try and to believe. Every mile gained towards the East is a victory but it is still too early to draw conclusions.

Asked about the sub 10,000 miles marker he said, “I’ve been looking at this number for quite some time like many others and it’s true that it’s symbolic to pass this milestone. It’s a good thing, like a milestone; I like these markers that make the race more enjoyable!” Track ’em.