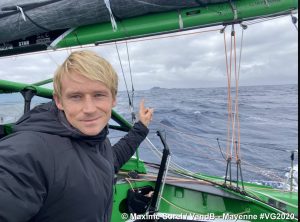 If the plot line were written only by leader Yannick Bestaven (Maître Coq IV) he would be allowed to escape from the evil clutches of the anticyclone and to ride off to a much more substantial distance on the two groups that are chasing him, Charlie Dalin (APIVIA) at 129 miles behind and Thomas Ruyant (LinkedOut) chasing at 165.1 miles.

Behind them Boris Herrmann in fourth is three to four knots quicker at 373 miles behind Bestaven, at the head of the second wave stretching 530 miles back from Herrmann to Maxime Sorel in 10th.

So complex is the modelling, tracking and timing of the sticky system which is moving south east across their path, that Ruyant today admitted he is half prepared to bide his time and watch Bestaven open the course.

But weather ace Christian Dumard, meteo adviser to the race, says there is a slender chance the skipper of Maître Coq might be able to extend his break, sailing close to the ice exclusion, while his chasers are forced north-eastwards to find a different, more roundabout route to hook into the next low pressure system.

“It is not clear if I manage to escape. It is hard to say. Rationally I am the first into the real high pressure areas and then should also be the first to get out, normally!” Explained Bestaven earlier today.

Ruyant responds, “We still have some pressure for a little while but further we go in a straight line the lighter it will be. So I hope Yannick doesn’t escape.”

out of the garage