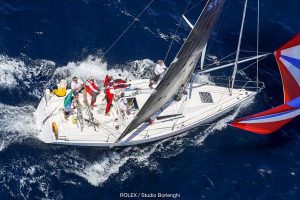 Just a week before the scheduled Boxing Day start the Cruising Yacht Club of Australia will meet this morning to decide whether the race should be called off for the first time in 75 years.

A small outbreak of COVID-19 two days ago in the Northern Beaches area of Sydney has triggered the crisis. The 250,000 residents of that region have been ordered not to travel and it’s estimated that at least 150 sailors and a third of the fleet who intended to take part in the race are affected.

A second problem relates to quarantine restrictions. The primary tactic in Australia’s successful strategy to control the spread of the Coronavirus has been the imposition of strict state border closures and compulsory 14-day quarantine periods for arriving travellers.

The government of Tasmania – the island state that has Hobart as its capital – has already declared the Northern Beaches region of Sydney a “Coronavirus hotspot”.  If allowed to disembark after finishing the race, crew who reside in that area could be required to quarantine in local hotels, at their own expense, for a fortnight. Very few, if any, would be prepared to do so.

The sudden resurgence of the virus in Sydney must be particularly frustrating for CYCA Commodore, Noel Cornish. He has spent months in patient negotiations with the relevant authorities to preserve the race.

Now he may well have to announce the club’s decision to cancel.

lifestyles of the rich