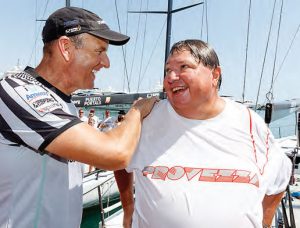 Over his eight years on the 52 Super Series Provezza Sailing’s popular owner Ergin Imre has known the highs… and the lows. But most of all it’s the addictive collection of ‘almost but not quite’ regattas that keep the hugely experienced team owner returning to the heat of battle year on year.

Since Provezza joined at the Royal Cup in Palma 2012, the third event in the inaugural 52 Super Series season, then racing with Olympic silver medallist Nick Rogers on the helm and American Tony Rey calling tactics and moulding the team, Provezza have evolved from a crew that was about 50 per cent amateurs, then racing the Judel-Vrolijk designed former Desafío, to becoming today’s regular podium contenders and occasional outright regatta winners.

‘What attracted me in the beginning was the level of competition, in terms of the technical levels and the level of the sailors. It is second only to the America’s Cup so to be able to go and compete at this level was appealing,’ recalls Imre whose most recent red Judel-Vrolijk design is the 11th to bear the Provezza name. Read on.