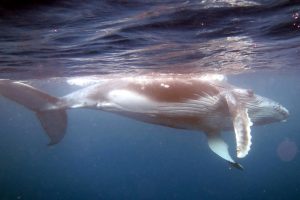 Often called the Blue Serengeti, the waters off the coast of Southern California earned this nickname thanks to the charismatic megafauna of whales, dolphins and turtles that live or migrate through this area. It can be an unforgettable experience to witness these animals in their natural habitat – after all the ocean is true wilderness.

If you have been fortunate to see some of these animals you may have wondered which species they were.  To help boaters more easily identify ocean animals, Saving Ocean Wildlife is providing this free Wildlife Field Guide with detailed pictures and information on the animals most likely to be seen.

Whether it is a dolphin or whale with a 5-million-year history or a turtle that’s been on this planet for 100 million years, it is painful to comprehend that in just a few short centuries many of them are now quickly facing extinction.  Species such as the leatherback sea turtle, green turtle, blue whale, fin whale, and sperm whale are some of the animals that inhabit these Pacific waters that are already listed as endangered.

Until 2013 there was an average of 9 confirmed whale entanglements off the Pacific West Coast each year.  During 2014-2017 that number jumped 450% to an average of 41 per year. Whales and other animals face this threat of entanglement on a daily basis along with other things they need to avoid in order to stay alive such as being hit by ships, or confusing plastic trash with food. The key to helping these animals survive is engaging the boating community to have more “eyes on the ocean” and to report animals in distress here.