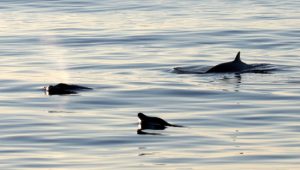 Researchers funded by the Naval Sea Systems Command (NAVSEA) Monitoring Program believe they have discovered a new species of beaked whale in the waters off Mexico’s Baja Peninsula.

NAVSEA funded the expedition to determine the source of a unique beaked whale vocalization near a Navy test area in Southern California thought to have come from a Perrin’s beaked whale. Researchers from the U.S. Navy and Mexico’s National Commission of Natural Protected Areas collaborated with other U.S. scientific organizations in an attempt to document the animal responsible for making the distinctive noise. Instead, the researchers encountered three animals that do not look or sound like any known beaked whale species.

“This expedition set out to link a known vocalization to a species of beaked whale that was previously described from stranded animals in southern California. Instead, we may have discovered an entirely new species of beaked whale with a new type of vocalization, which is astonishing,” said Dr. Elizabeth Henderson, a marine researcher from the Naval Information Warfare Center (NIWC) Pacific. Read on.