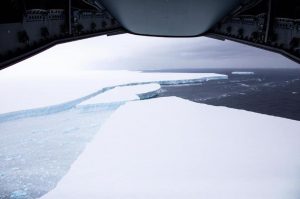 Britain’s Royal Air Force released dramatic images of what is believed to be the world’s largest iceberg as it drifts from the Antarctic shelf towards South Georgia island. Using enhanced technologies fitted aboard an RAF Airbus 400M, the crew, which is part of the British Forces South Atlantic Islands (BFSAI) force, captured detailed images of berg for scientists to study and predict the impact of this and other icebergs.

Known as A68a, the berg broke away from the Antarctica ice shelf in July 2017. At the time, scientists estimated its size at nearly 6,000 sq km (approximately 2,300 sq. miles). They said it could weigh more than one trillion tons. Read on.

so i talked to ernesto today…