Well here’s a bit of legal nastiness that has spilled over from from the 2016/2017 Vendee Globe involving Alex Thomson and Global Technologies Racing Limited, a specialist manufacturer of carbon fiber parts, producing specialist items for the aerospace and medical industries as well as motor and yacht racing. 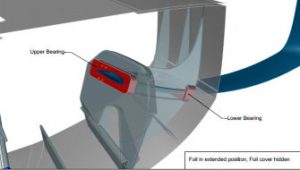 In the 2016/2017 race, boats participating were for the first time allowed to use hydrofoils of a new design, so-called Dali hydrofoils, apparently because of the similarity of their shape to that of Salvador Dali’s moustache. The hydrofoils are intended to lift the boat out of the water thereby reducing the wetted area of the hull.

In 2015, the Claimant produced a pair of hydrofoils for the Boat pursuant to a contract with the Defendant. Later the Claimant manufactured a second pair with modifications to the Defendant’s order. (These two pairs have been distinguished by calling the first version “the V1s” and the second, “the V2s,” a convention that I shall follow.) Both the V1s and the V2s were designed by VPLP, a French naval architecture company, and Guillaume Verdier, a naval architect with whom it would seem VPLP regularly worked.

Whilst Mr Thomson was testing the port hydrofoil of the V2s on the Solent on 3 September 2016, the hydrofoil suffered a catastrophic failure, the result of which rendered it incapable of being used. As a result, Mr Thomson reverted to using the V1s both in training and in the race itself. In the event he came second. Coincidentally, the starboard foil broke during the race, although Mr Thomson nevertheless finished second.

The Defendant has paid some of the purchase price of the V2s. The Claimant sues for the balance of the purchase price and storage charges relating to the starboard foil (which was never delivered). The Defendant denies liability and counterclaims on the basis that the V2s were not manufactured to the appropriate quality and were consequently worthless. It seeks to recover the money spent on the V2s, as well as alleged consequential losses.

Click here to read the rather lengthy, detailed  and fascinating case and findings. And jump in the discussion thread in our Ocean Racing Anarchy forum, brought to you by Evolution Sails.