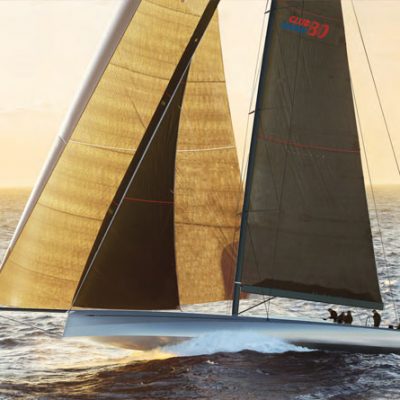 Conventional wisdom suggests that promoting a maxi-sized one design will always be a challenge. But then who cares about convention when a boat like this pops up on your radar?

Despite the continued growth and success of one-design classes around the world, there’s a reason why there has not been an 80ft onedesign since the Grand Mistral Maxi class of 1999. For many owners, winning at this size has frequently been as much about smart thinking and engineering their own private advantage, as it has been about success on the racecourse. One design takes all that away. The big guns at Nautor’s Swan know this, some of them have been a part of those very circuits, but they also believe that the landscape is different today and that their recently announced ClubSwan 80 one-design will succeed.

The announcement of this striking, all-out 80ft racer marks another bold step forward for a builder that has reinvented itself once again by managing to shake off the popular image of a range of elegant but sedate racer/cruisers in favour of two fresh and distinct new lines – racing, with ClubSwan Yachts, and performance cruising, with the Swan and Maxi Swan lines.  Read on.

ichi but not scratchy