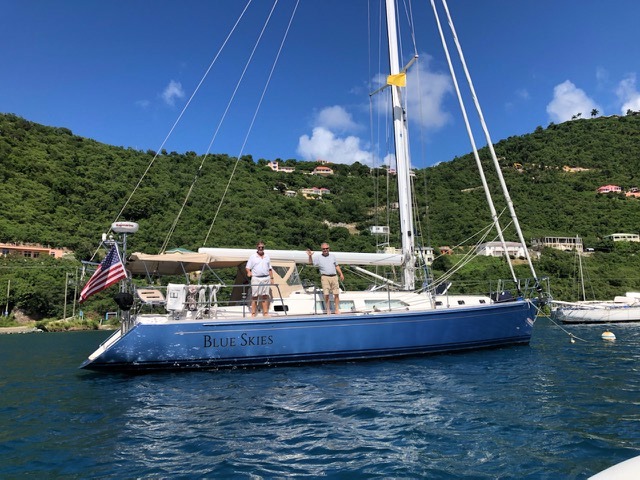 A life-long sailor, I have resided in the US Virgin Islands for the past 10 years. This entire time, my wife and I have enjoyed the rights of innocent passage (granted by UNCLOS) while sailing our boat, Blue Skies, on either side of the US and British Virgin Islands’ borders.

On November 16, 2020, my crew and I arrived in St Thomas, VI from our summer port of Portsmouth RI. Once in St Thomas, I researched “Notice to Mariners” on both the USVI and BVI websites. Nothing related to operation of private pleasure craft was published on either site. While I was aware the BVI had closed its territory to visitors, I felt confident that innocent passage remained as it had.

On November 18, we departed St. Thomas sailing for Francis Bay, St. John. We took a long tack north into BVI waters. With no intention of “arriving” anywhere in the BVI (i.e., no mooring, anchoring, docking or landing) I felt certain our innocent passage was just that. We were flying the American flag and our AIS was broadcasting our position. It was obvious we were not aware of any change to the right of innocent passage.

At a point about 1 mile south of White Bay, Jost Van Dyke, a BVI police boat approached and ordered us to “stop the boat”. We furled the sails and drifted on the calm sea as the police began their interrogation. After confirming we had departed St Thomas USVI, were bound for St. John USVI, and knew we were in BVI waters but with no intention of “arriving” at any point in BVI, the police placed a telephone call. Per the police, that person on the other end of that call (Commissioner of Customs Wade Smith?) had ordered us detained and directed to West End Customs House, Tortola, BVI.

Quoting from Article 26 of UNCOLS, a territory can suspend the right of innocent passage, but “such suspension shall take effect only after having been duly published”. There was no Notice to Mariners declaring an end to innocent passage. Instead, on June 11, 2020, the BVI Premier issued a press release describing a Marine Exclusion Zone. Quoting the (poorly worded) press release, the western boundary of this exclusion zone is “…a dividing line formed between the westernmost tip of Jost Van Dyke and the westernmost tip of Tortola.” We were detained at 18 degrees 25.629 minutes north, 64 degrees 46.096 minutes west; a position inside the BVI waters, but outside the exclusion zone boundary.

At the BVI Customs House, Officer Achieva Brathwatte informed us we were fined the maximum, $20,000; 10,000 each for 2 violations under the Customs Management and Duties Act; Sec 22 (arriving in BVI waters at a place other than a customs port) and Sec 24 (“..every vessel arriving at a customs port…shall, within 12 hours of that arrival, deliver…a report..”).

“Arrival” in Sec 22 is commonly known to mean anchoring, mooring, docking or landing; not innocent passage. Having been escorted to the customs port and immediately being processed, we were, ipso facto, not in violation of Sec 24. I was fined under Sec 24 (per Ofcr Brathwatte) because, had I not been detained, I would have violated it (by proceeding to St. John). But, obviously, I didn’t.

My due process options were to sign an Admission of Guilt, pay the fine and gain release of my boat and crew, or, challenge it and have the boat impounded and crew forced into a 14-day COVID quarantine, after which, we would wait for a court hearing. Feeling the duress of the latter option, I signed an Admission of Guilt, paid the fine, and returned to the USA. I am now engaged in attempt to vacate my guilty plea and litigate the validity of the fines.

It is both ironic and disingenuous, that the BVI government has emphasized their seizure of vessels entering their waters is to protect their population from COVID. If that was true, they would direct vessels in Blue Skies’ situation to return to US waters immediately and police would continue to make known their closed-water-border posture (as I came to find they did all summer.

Having only just arrived in-territory, I had no benefit of this “common knowledge”.) Instead, they detained us ashore where, if we were COVID positive, we could expose their citizens to the disease. No, this detention and fine via a mis-application of law, is tantamount to piracy and extortion; a money grab of the worst sort under the guise of legitimate government action perpetrated against innocent yachtsmen.

Post Script: I am seeking redress from the BVI Government fines as follows: