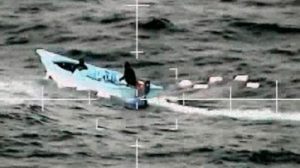 The Royal Navy amphib RFA Argus has carried out five cocaine busts in seven weeks in Caribbean waters. Argus, which forward-deployed to the region for hurricane relief readiness earlier this year, has been working with U.S. Navy, U.S. Coast Guard and Royal Netherlands Navy forces to intercept drug-runners, with considerable success.

In her latest two busts, Argus intercepted several tonnes of cocaine with a UK street value estimated at $160 million. During the first incident, the drug runners dumped their cargo overboard and sent it to the bottom. In the second, more than one tonne of cocaine was recovered from the sea and from the smugglers’ boat.

In the most recent bust, which resulted in a haul of 1,085kg of cocaine, Argus launched her Wildcat helicopter to search for a suspected drug runner.  Read on.