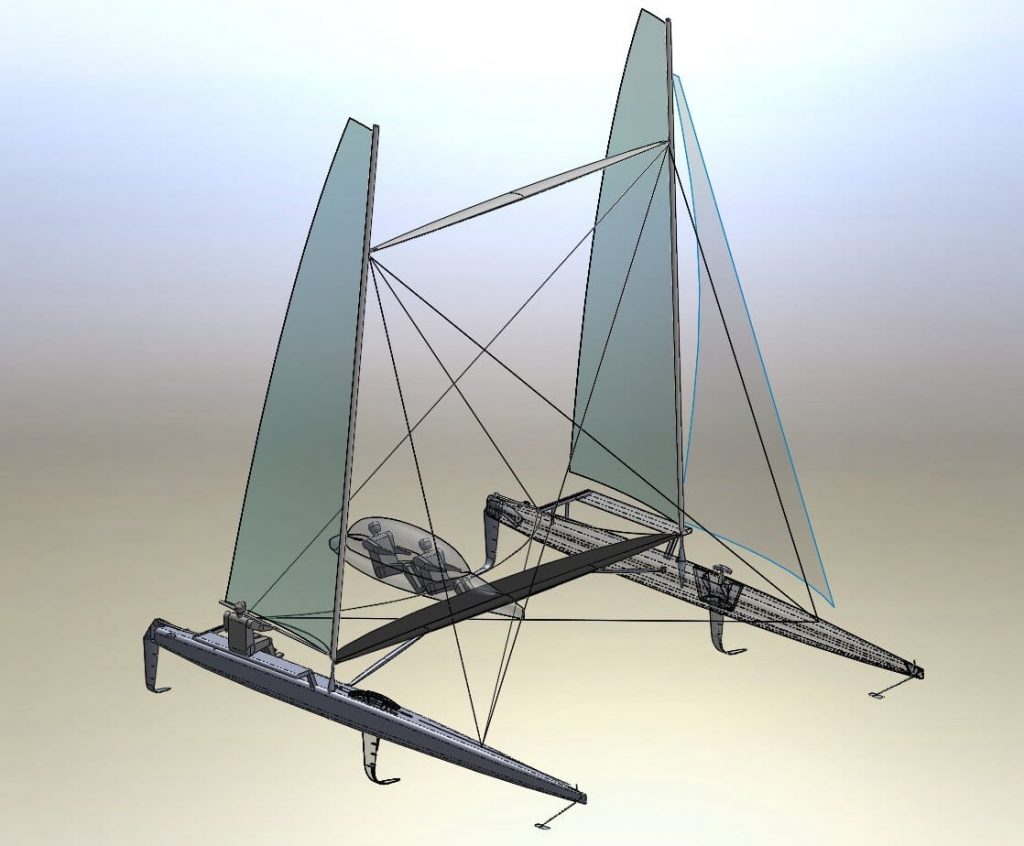 The Quadfoiler was always a follow up project to the TriFoiler. We wanted to preserve what was good about the TriFoiler and make improvements where it was deficient. It has always been a disappointment for me that I have not been able to follow up on the TriFoiler.

About 2005 we began work on a bi-plane rigged, 6 foot model catamaran. It’s called the Quadfoiler because it has 4 foils. A link to a video of this model is shown below. In 2011 we worked on 30 foot version.

Design Philosophy
The key features of the TriFoiler are the efficiency and the authority that the foils have to move the boat up and down which is important for rough water performance. We believe that the L shaped foils as used in the America’s Cup cats and GP 50s are the ideal foils – most efficient. They pierce the surface at 90 degrees which minimizes spray drag. The aspect ratio of the horizontal foil adds to aspect ratio of the vertical foil and they are very clean below the surface ( there are no flaps or T connections). The new AC 75 monohulls are very cool, but those T foils do not look very clean.

The TriFoiler is very stable and very good at keeping the boat at the right height even in rough water. There are several reasons for this. The entire foil is pitched up or down which enables maximum lift from the foil. The sensors are way out in front of the boat so that the foils can anticipate the waves and have time to react to waves. The foils definitely have the ability to move the boat up and down quickly.

The biggest problem with TriFoiler is the forward facing sensor arms – they are vulnerable and they look odd. The Quadfoiler will use a long slender hull to create a mount where a trailing wand sensor can be mounted. The long slender hulls should provide good light wind performance and good ability to punch through wave tops.
The Quadfoiler will use an innovation we call virtual pivot which will reduce the loads on the sensors and allow fine tuning of the sensor system for different wave states. Hobiecat was granted a U.S. patent for this system and link is provided below.

Current State of the Project
The main hulls were about 50% complete but then there was an accident that damaged the hulls. Considerable skill will be required to fix and complete the hulls. There are several main components that have not been started – the main beam, the compression strut and diagonal struts (struts that connect the hulls to the main beam. See the renderings in the pictures linked below). All other components are in various stages of completion.

The foils and rudders need fairing and painting. The masts are built from tornado tooling. They are 100% carbon. They are a little heavy with the intent to not use spreaders. They need a luff groove glued on. The sails are used Nacra 20 sails. There are obviously many more details. A link to a photo album is provided below.