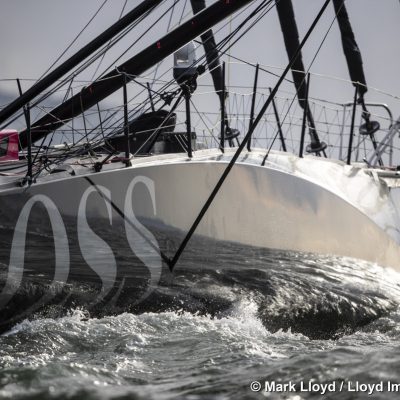 Alex Thomson leads the Vendée Globe by some 26 nautical miles this afternoon, first to deal with the worst of storm Theta at some 250 miles south of the Azores. The British skipper took HUGO BOSS as close to the centre of the system as he considered prudent, before a difficult gybe in around 40kts of wind and 5 metre seas around 1330hrs this afternoon, a move which should see him gain significantly on all but the French veteran Jean Le Cam who took a similar track.

The reward for the extra risk is sailing fewer miles than the rivals who are chasing him is being slingshot out of the low in strong N an NW’ly winds which, all going well, should net him a significant miles on his fast foiling rivals.

Thomson’s nearest pursuer is 61 year old Jean Le Cam whose ocean racing history dates back to the 1980s and who won La Solitaire du Figaro three times and finished second in the Vendée Globe in 2004-5. He is sailing a 2007 launched boat with conventional straight daggerboards and leads all of the latest generation foilers other than the radical black HUGO BOSS. Photo by Mark Lloyd

Le Cam is more than twenty miles up on the third placed Nico Troussel on CORUM L’Épargne. More.

a different kind of happy

for kids, by kids