On occasion we run excerpts from books, and we thought this one, from Webb Chiles’ 1977 Storm Passage, would be good. This was written on the day he became the first American to round Cape Horn alone.  Although ludicrously slow by current standards, that was on a two stop circumnavigation that was then the fastest ever made solo in a monohull and his Ericson 37, Egregious might have been the first boat with a modern fin keel spade rudder sailed alone around the Horn. 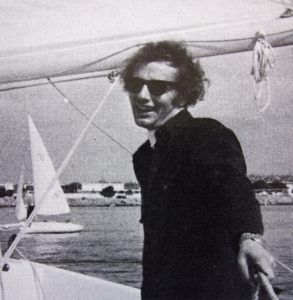 AT 5:00 A.M., we were 70 miles due south of Cape Horn. Those are the finest words I have ever written. How many times my thoughts have sailed here while I stood on Point Loma or walked along Mission Beach and now I have, too.

To say we rounded the Horn would be presumptuous and inaccurate. We merely continued to be blown ahead of a gale, which came up suddenly after midnight.

Ashore, I had imagined I would have a glass of my best brandy and pour one for the sea; but I felt no desire to honor in victory the gods I steadfastly denied in defeat. Now as always, the sea is indifferent to me. And in the event, I did not even want a drink myself. It was a day not for contemplation, but survival.

There was one inescapable debt, though, and that was to Bach. The “Little Fugue in G Minor” was finally heard, a small but triumphant sound at 57° South. The Horn has lived up to its reputation, making me glad I gave Horn Island a wide berth. It is an overwhelming storm. By dawn the wind was blowing above fifty knots and, of course, had ripped the mainsail, which I repaired but did not attempt the by-then-impossible task of resetting.

The waves were no higher than others I have known, averaging about 20 feet—which is quite high enough, thank you—but there were two sets of them: one coming from the southwest, driven before the wind; the other from the northwest, rebounding off the land. Both sets were breaking.

For the first time, I tied myself in the cockpit during daylight hours, leaving only sufficient slack in the lines so I could move to steer. Countless waves broke over the cockpit. Without being tied securely, I would have been washed away dozens of times.

Egregious was rolled onto her beam ends regularly, and in those cross seas sometimes she would go over to port, sometimes to starboard. Even though it was not in operation, the servo-rudder for the self-steering remained in the water and as we surfed down some of the larger waves, a rooster tail rose from it, as from a hydroplane. The strain on the tiller was immense, often forcing me to brace myself with my legs and use both hands to keep us on course. There was no time to look back and see on which quarter the next dangerous wave loomed, but after a while I could tell by feel and sound.

And though I caught only momentary glimpses of them as they swooped across my field of vision, even in the very strongest wind albatrosses and petrels soared about as usual. At such moments you know that no matter how well you adapt, they belong here and you do not. Determination, skill, and luck give you nothing more than a temporary dispensation to trespass.

Throughout what became a very long, fatiguing day, I steered. To have left the tiller even momentarily would have been impossible. Finally, at 7:00 p.m., the wind decreased to 30 knots, and stiff and cold and tired and hungry, I stumbled into the cabin.

Since then I have cooked my victory banquet of stew, gone back on deck and set the storm jib, and written this. My hands and feet are frostbitten, and a glance in the mirror just revealed dead skin dangling from my ears in bloody strips.

The first man to sail around the world alone—an American, Joshua Slocum, before the turn of the century—went through the Straits of Magellan. As far as I know, I am the first of my countrymen to pass the Horn alone. But now that I have survived the day, I can believe that even if I were not the first, the struggle would be worthwhile and that the day should have been as it was.

A smashed hand, frostbite, piercing cold, fatigue are all made endurable. The water I bailed from the bilge into the Atlantic this morning came from the Pacific last night. Cape Horn, which a year ago seemed so impossibly remote, is behind us.

you cannot make this shit up