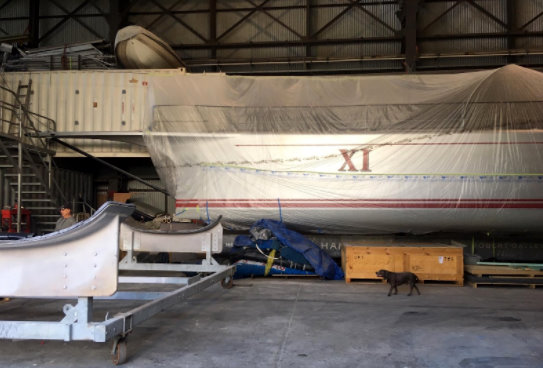 For the first time in 16 years the legendary supermaxi Wild Oats XI will not be competing in the Sydney-Hobart race. The silver-painted Reichel-Pugh is to remain in the shed on December 26 – mast out, keel off, and wrapped in plastic.

WOXI’s arch rival Scallywag (previously Ragamuffin 100 and Maximus) is also a non-starter having withdrawn their entry, reportedly because owner Seng Huang Lee and some crew are unwilling to meet the two-week COVID-19 quarantine requirement imposed by the Australian government on all arriving overseas visitors.

So only two of the world’s fleet of veteran 100-footers will contest the race – 2016 line honours winner InfoTrack (previously Loyal, Rambler 100 and Speedboat) and Black Jack (previously Europa, and before that Alfa Romeo when she won line honours in 2009).

A spokesman for the Oatley family, who own Wild Oats XI, said they had decided not to enter the nine-time line honours winner as a mark of respect for all those Australians who have suffered through the Coronavirus epidemic. But there are likely to be additional, more practical, reasons.

The Oatley family also own the Hamilton Island Resort in Queensland where 1,200 of their staff have been laid off for most of the year while tourism was suspended. The optics of millionaires going yacht racing while hundreds of their workers are still unemployed would make for some decidedly unattractive public relations.

Also, as with Scallywag, many of the specialist WOXI crew are fly-in/fly-out professionals reluctant to submit to the two-week quarantine in Australia – and whatever similar restrictions might apply when they arrived at their next job.

The supermaxis have dominated Sydney-Hobart media attention for almost 20 years but COVID-19 may now have accelerated their demise as the focus of public interest.  The remaining boats in this year’s two-horse race are so different that the result is likely to be determined more by weather than sailing skill. Black Jack is a narrow downhill flyer; InfoTrack will be much quicker if the bulk of the race is a bash to windward.

Despite regular upgrades and modifications, all of the world’s 100-footers now seem antique beside the more recent offshore designs in the 50-70 foot range. For enthusiasts, the real competition to follow will be between the TP52s – a classic ‘race within a race’. Of the 98 boats entered for the 628nm dash to Hobart eight are TPs.

Meanwhile, the onshore dispute between the new Two-Handed division and the skippers of fully-crewed boats has, for the moment, been resolved. The issue at stake was whether the two-handed entrants, using autopilot, should be eligible for the overall handicap prize, the Tattersall Cup.

The Cruising Yacht Club of Australia, the organizing authority for the Sydney-Hobart, has now revoked its original policy of making no distinction between boats using autopilot and those steered by hand.

A notice posted on their website on Friday confirms that the NoR has been amended “to reflect that two-handed entrants will be scored within their own handicap category divisions and not be eligible to compete against full crewed boats in divisions for the overall race win.”  CYCA Commodore, Noel Cornish, was refreshingly frank when explaining this backflip. “We are genuinely enthusiastic about encouraging the two-handers. But with hindsight, because of our enthusiasm in embracing two-handed sailing, we may have acted too quickly allowing two-handed boats to be eligible to compete for one of sailing’s most prestigious trophies”, he said.

But this battle is far from over. The CYCA statement concedes that further understanding needs to be gained to appreciate the full capacity and range of technology available to two-handed competitors, “and how these are accommodated within different handicap rating systems”.

In other words, if the new two-handed division is a success this year – and someone can work out a fair way of handicapping autohelm technology – then stand by for their possible inclusion in the overall competition in 2021. “The door hasn’t closed”, says Cornish. “We’re playing a long game”.