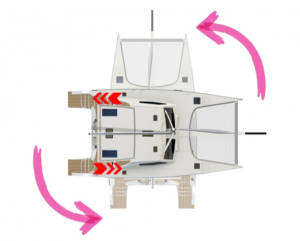 From our awesome advertisers, Corsair Marine, with some things you maybe don’t think about when getting a cruising multihull, as shown here with their Seawind range of cats.

Of the numerous benefits of owning a catamaran, one which simply cannot be overlooked is the control advantages offered with a dual engine setup as found in most modern cruising catamarans.  And while the redundancy of twin engines is a huge bonus for any serious sailor, you simply have to admire the maneuvering possibilities offered in this simple setup.

When the need arises you can turn your catamaran in a 360 degree spin within its own boat length. When entering a crowded marina at slow speeds, hold the rudders on center and use the engines to steer the boat through to the boats berth. To turn to Starboard, apply more throttle to the Port engine and vise versa (again, resisting any urge to touch the rudders). To perform a hard turn to Port, increase the Starboard throttle forward and push the Port throttle into reverse. Read on.