the death of art 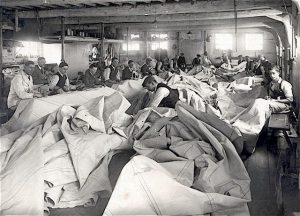 “In the early part of the last century there was a very fine old sailmaker, Eversfield, who lived at Gravesend, and who always made mainsails for the Pearl cutter, built for the Marquis of Anglesey in 1820, by Sainty of Wivenhoe, who also built the frigate Pique for His Majesty’s Navy, and I believe, ruined himself over it.

But the Marquis of Anglesey was a kind old man, and gave Sainty a pension as long as he lived. Lord Anglesey retained the Pearl up to the day of his death, which was, I think, in 1854, and my father used to tell me that they were nice, smooth sails with a good round leech and foot and no one could find very much fault with them – in fact, they were held up as pattern sails in those days.

Unfortunately, Everfield’s sons did not continue the business at Gravesend, and the art died with him, as he intended that it should.”

(Established in 1790, the Ratsey & Lapthorn sailmaking firm has been in continuous production for 230 years. Lord Nelson’s Victory set Ratsey sails during the battle of Trafalgar. With lofts in Cowes and New York, Ratseys were happy to make sails for both defenders and challengers in the America’s Cup.)

the last race ever?