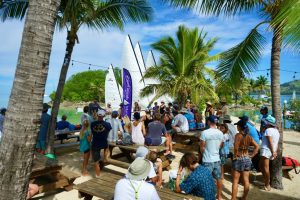 The 37th annual Fiji Regatta Week at Musket Cove has just wrapped up, and what an incredible event it was. During a time when virtually the entire world was shut down due to a global pandemic, one of the classic cruiser regattas of the South Pacific went down like it was 2019. With Fiji having been COVID-contained with no cases outside of government quarantine for nearly six straight months, a couple hundred international cruising sailors from six different continents just took part in a regatta that included no social distancing, masks or any other COVID related weirdness. Just 210 lucky souls from a very respectable turnout of 65 boats, sailing all day and celebrating all night in the heart of paradise.

“Only a few months ago nobody expected this regatta to actually go ahead and nobody’s having a regatta like this anywhere in the world from what we understand. Because of the Blue Lane Initiative, we’ve been able to ensure that we have the health protocol and measures put in place ensuring safety for not just Fijians but everybody coming to Fiji.

And also at the same time to allow people to come to Fiji and participate and get to know our people and experience the friendliness of the Fijian people. But also to have fun themselves. So I think this regatta is quite symbolic”, Attorney General and Minister of Economy Aiyaz-Sayed Khaiyum told me in our interview.

The #2 man in Fijian politics, who masterminded Fiji’s economic recovery plan presided over the regatta as it’s guest of honor. Pretty much every sailor at the regatta, and the locals, wanted to walk up to the man and say thank you. And many did. ‘Thank you for making this regatta possible, we are all so happy to be here this year’.

To get the massive harbor at Musket Cove slam full of boats during a pandemic was impressive to say the least, and a great achievement for all parties involved. To pull it off and have a regatta that was every bit as good, if not better, than past events was something that was truly special to be a part of. A general sentiment was ‘Half the size, 1/3 the staff, but even more heart’.

After a few days of rain, the skies cleared and the opening party kicked off with an amazing sunset before four days of the type of sailing that this area is famous for. Warm, flat-water sailing under blue, sunny skies with mellow winds and some of the most visually stunning sailing on earth, with reefs and islands all around. All accentuated by a very international crowd and epic Fijian hospitality.

Day 1 of the regatta saw day 1 of the Port Opua Hobie Cat Challenge followed by the Sandbank Race, which sends the fleet through a relatively narrow reef pass at the start and the finish. Right off the start, the custom Wylie 60 Roxanne managed to thread the needle between the reef pass on one tack, while the rest of the fleet had to throw in a couple of tacks or more to exit the pass. Immediately launched, Roxanne would only extend on her lead in the light wind race to stomp the fleet.

Behind Roxanne, the San Francisco-based Outremer 51 Archer came home nearly overlapped with the locally based fast racing cat Flat Chat, which used to be one of the quickest things on the east coast of Australia. Behind those boats were the rest of the Outremer and other fast cruising cats with a solid smattering of newer Benteau’s, Hanse’s and other modern performance cruising yachts. The cruisified round-the-world racers including the old 80’ Whitbread maxi and ex-Vendée Globe yacht were further back in the fleet.

Day 2 saw more Hobie Cat racing and the inaugural in-the-bay SUP challenge; a unique new sprint match racing format on racing standup paddleboards that proved to be a crowd favorite. Day 3 was the main event of the regatta however, the Marsden Cove Marina Around Malolo Classic race. Again under light winds and blue skies, the bigger fleet of 30 boats which now included the quick local racing multihulls departed Musket Cove at noon and went on a tour of the Malolo Island group. Moments after the nearly calm start, the fleet started scooting along in good breeze which let the leaders escape while the rest of the boats got stuck in a light-air transition zone by Wadiqi Island.

The 8.5 meter cat Miss Minnie, Seacart 26 Kaia and the Wylie 60 were able to extend on their leads while the bulk of the fleet got stuck in a light-air beat which required short-tacking between reef. Once up to the corner of Castaway Island, the fleet was mostly able to carry spinnakers all the way down to Black Rock before beating to the finish back in Musket Cove. After getting barely nipped at the finish in last year’s race by a 48-foot Craig Schionning catamaran named Roam, the local 8.5-meter class catamaran Miss Minnie got it done this year and claimed line honors. Top monohull was again the Wylie 60 Roxanne, while the top cruising cat was again the Outremer 51 Archer, which I was fortunate enough to sail onboard, chucking the Phantom 4 up a number of times to make the video that I linked with this article.

Finally on the last day, my new company staged a 4-mile standup paddleboard race in the Bay which attracted an impressive 22 racers before the Hobie Cat match racing tournament ran a 3-boat final, having whittled the fleet down from more than 40 teams at the outset. The resort director, a former Southern Spars rig engineer for Cup teams, managed to win it outright with another life long cat sailor crewing for him.

Sure, it’s not the most serious regatta on earth, but it’s certainly one of the most fun. And in a year like 2020, can’t we all use some fun? Bloody cool boats, lively racing and a great crowd all celebrating the sport in arguably the most beautiful place on earth. Truly a special thing to be a part of, bring on 2021.

as the page turns