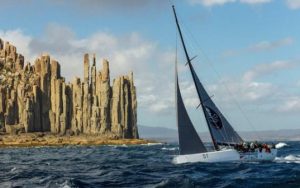 With the closing date for Sydney-Hobart entries now just two weeks away, the stalwarts of the offshore racing community are all asking the same question: can there be a race while the nation is still fighting to fully contain COVID-19?

The official position of the organisers, the Cruising Yacht Club of Australia, is that it is still too early to give a definitive answer, but the mood is certainly positive. CYCA Commodore Noel Cornish, himself a competitive ocean racing skipper, today confirmed that the club is assuming the event will be staged.

“We’re just going to do everything we possibly can to make this race happen”, he said. “There’s no reason not to expect the race itself to go ahead as per normal. That’s the plan.”

There are 77 confirmed entrants, but a lot of ducks will have to be lined up in neat rows if the starting gun is to fire as usual at 13:00hrs on December 26 for the 76th running of the Sydney-Hobart.

Here’s the core problem: the race starts in one state (New South Wales) and finishes in another (Tasmania). It is a peculiarity of Australia’s federated political system that the states have close to absolute and autonomous power on health issues. While the Coronavirus is now largely under control across the country each state proclaims its own restrictions on border crossings, and sets different quarantine requirements.

So, while NSW might be happy to wave the crews good-bye from Sydney on Boxing Day, Tasmania could lock them all in quarantine for a fortnight when they arrive in Hobart three days later. Under that scenario, the race would clearly not proceed.

Not surprisingly, Commodore Cornish has been working closely with the Premiers of  New South Wales and Tasmania. Both state leaders are keen for the Sydney-Hobart to happen; both say the final decision will rest on the advice of their respective health authorities. Tasmania has nominated a decision deadline of November 19 – just five weeks before the start.

What Cornish can confirm is that the normal hype and hoopla before and after the race will have to be severely constrained to conform with social distancing rules. While this might reduce some promotional opportunities for the sponsors, Rolex, the Commodore reports that their enthusiasm and support for the event is undiminished.

Meanwhile, the CYCA is still dealing with controversy over the use of autopilots in the new two-handed division of the Sydney Hobart. For the moment, the club is apparently resolving the question of whether yachts that depend on automatic steering should be eligible for the overall handicap prize with the wisdom of Solomon: they’ve cut the baby in half.

Entrants using the ‘traditional’ older systems that simply hold a pre-set course will be eligible; those that rely on the new, super-sophisticated computer-driven autopilots can only qualify for places within their own double-handed division. Determining exactly where to draw that line to split the fleet is a tricky technical issue sure to prompt more argument, especially from the larger Grand Prix-style boats.

Whatever, it’s safe to say that this year’s Sydney-Hobart, if it happens at all, will be like no other.

how yachting killed sailing in the us