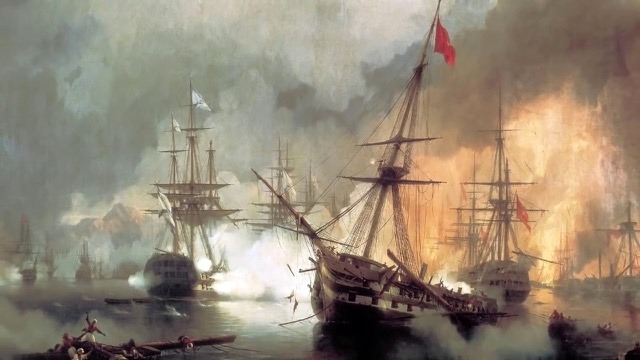 “In the middle of the night the Russians set fire to nine of their warships that were still in the harbor. The fire spread with rapidity along the vessels, and soon lighted up the whole of the northern heavens. The masts were speedily licked and warmed into a fiery glow and the rigging burst out into fitful wavering lines of light, struggling with the wind for life: the yards shed lambent showers of sparks and burning splinters upon the water.

The faces of the Russian soldiers and sailors who were scattered about on the face of the cliff shone out now and then. The work of destruction spread rapidly. The vessels were soon nothing but huge arks of blinding light, which hissed and crackled fiercely and threw up clouds of sparks and embers; and the guns, as they became hot, exploded, and shook the crazy hulls to atoms. One after another they went down in the settling waters.”

(In a period when words were still more powerful than pictures, the graphic reporting of William Russell exerted a huge influence on public and political opinion in Britain. He is acknowledged as the father of modern war reporting and covered the Crimean War, the Indian Mutiny, the American Civil War, the Franco-Prussian War and the Zulu War. Russell died in 1907.)

he’s gonna get it