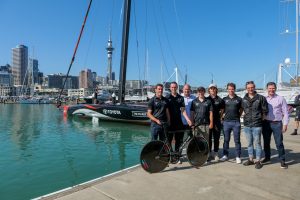 Experts in carbon fiber, Southern Spars saw an opportunity to apply learnings gained in its core composite masts and rigging business, around strength, weight and stiffness in particular, to design a ground breaking new wheel for Cycling New Zealand’s 2016 Olympic campaign. It’s just one example of cross pollination of ideas and expertise that Southern Spars says is at the heart of Kiwi innovation.