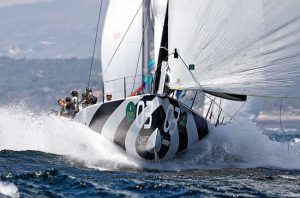 Doug DeVos is one 52 Super Series team owner who has not been completely deprived of his love of TP52 sailing and racing. While the Quantum Racing raceboat has remained idle this summer along with the rest of the European fleet, DeVos has been lucky enough to have been able to race his second TP52, Windquest, formerly the 2015 championship-winning Quantum Racing, in the new Great Lakes 52 Series.

This hastily assembled new circuit has enjoyed close, spirited, corrected-time racing this summer under ORR, with up to six boats competing at different times, most recently Windquest, Robert and Laura Hughes’ Heartbreaker (the former Alegre), Chris Duhon’s Mockingbird (which began life as Patches), Philip and Sharon O’Niel’s Natalie J (which was formerly Fox), taking on the shiny brand new Botín 52 Fox of Victor Wild as well as James Murray’s Pac 52 Callisto, the Judel-Vrolijk design that was launched as Invisible Hand. After 16 races DeVos leads the series. Read on.