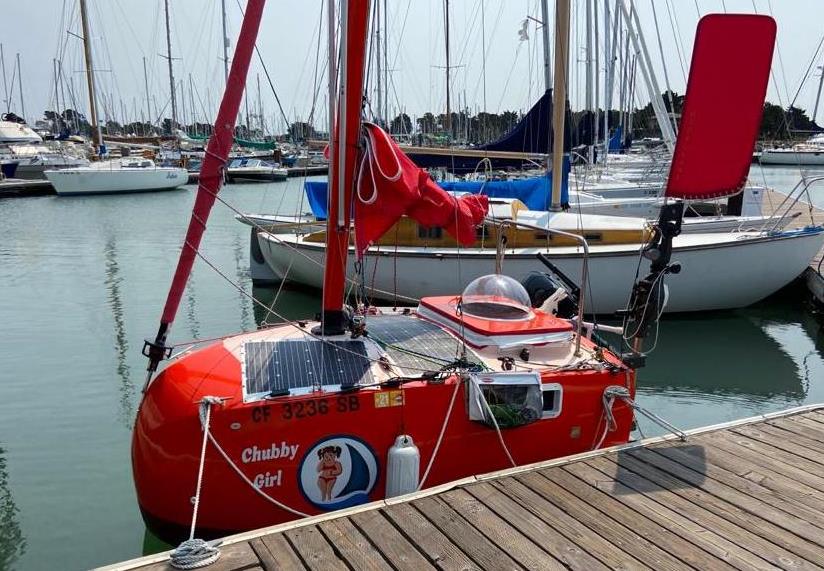 We’re glad that we can count on our friends in San Francisco to give us two certifiably wacky voyages to follow during these tough COVID days that have shut down much of the sailing world. Just this week, two very interesting yet very different world record attempts have sailed under San Francisco’s iconic Golden Gate Bridge to points well over the horizon.

First, it was Wilbur Spaul who sailed out the Gate on the 9-foot Chubby Girl to attempt to become the smallest boat to ever sail to Hawaii. A record that Spaul’s been inspired to tackle for nearly forty years, he tried to attempt this record last year but the first boat that he built – while strong – ended up being a shitter which sent him back to the drawing board.

Hooking up with Berkeley-based boatbuilder Cree Partridge and renowned Bay Area naval architect Jim Antrim, Spaul managed to put together the 9-foot Chubby Girl on a serious budget using two dinghies glassed together with a 15-inch spacer in between. With wind-vane steering, a furling head sail, solar power and sat comms, and everything else an eccentric nutter requires to go to sea in a 9-foot bath tub, we reckon Spaul’s got a pretty good chance of success. With both main and jib set, the world’s first and only Antrim 9 is said to plod along at about 2 knots on a reach but light up to hit 3’s downwind. Spaul expects the journey to take about two months and was making 1.9 knots towards Hawaii as of this writing. Follow Spaul at www.ChubbyGirlCruising.com. 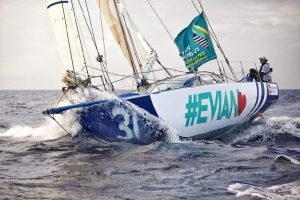 to take on the late, great Guo Chuan’s solo non-stop Class 40 circumnavigation record of 137 days and 20 hours. Relatively new to sailing, Philippe has made smart, calculated moves in learning to sail and undertake big voyages and we’re stoked to see him taking on such an incredible yet very attainable record! Go Philippe! After learning to sail in just 2013, Philippe bought a race-ready Olson 30 and trained in the Bay and offshore before managing to win the 2018 Singlehanded Transpac. His Class 40 – bow number 31 – Changabang is a tough, older, budget-conscious boat designed by Frenchman Francois Lucas.

With a couple of Route du Rhum’s under her belt, not to mention the Fastnet and TJV among many other races, Changabang should be a well-sorted platform. With an old, potentially tired boat that has what appear to be quite old sails and rigging and basic preparation however, we’re cautiously excited to follow Jamotte’s attempt at this solo, non-stop round the world record. Currently making close to 9 knots reaching away from land in northwesterlies, Philippe should make quick progress south in these early days before having to avoid and navigate the passage of Hurricane Marie. Check out Philippe’s blog and tracker at www.pjsails.com

Fair winds and following seas to both these legends and thanks to Latitude 38 for the heads up! – Ronnie Simpson.