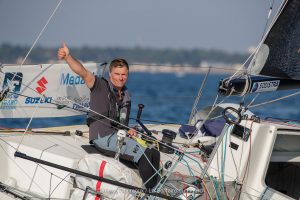 After rounding the NW corner of France in light air and descending Brittany’s coastline towards a finish in Saint Nazaire, Solitaire du Figaro sailor Frederic Duthil onboard Technique Voile – Cabinet Bourhis Generali managed something that we’ve very rarely seen when he was able to go from last place to first place in about 40 nautical miles of sailing. While approaching a trio of islands near Quiberon – just thirty miles from the finish – there was a major split in the fleet with the majority of boats choosing the middle option to split the islands while many of the leaders chose the northerly route.

Duthil and two other back markers worked the south, sailing just below the island of ‘Belle Ile en Mer’. This proved to be a fortuitous move as Duthil and rookie Marc Mallaret on CER Occitanie picked up a puff that propelled them to 7 knots of boat speed while the rest of the fleet bobbed around making just 1-3 knots. Quickly moving from 32nd and 33rd place (out of 33) into 1st and 2nd, the duo managed to collect Adrien Hardy and Ocean Attitude to sail 1-2-3 to the finish and put a solid gap to the next finisher.

More importantly however, overall leader Armel le Cleac’h on Banque Populaire was able to work himself into the lead of the middle group of boats, gradually positioning himself south into the new breeze and consolidating his gains on the fleet’s overall leaders to finish a strong 4th place. With a strong performance on the fourth and final leg of the regatta, le Cleac’h could lock up his third overall win in the Solitaire and his first in a decade.

His three main rivals entering this leg – stage 1 winner Xavier Macaire, three-time champ Yann Elies and Briton Sam Goodchild – all got hosed up north, but nobody got it worse than Sam. After finishing 2nd place in the 2nd leg of the regatta, Goodchild controlled the pace for much of the third leg while attempting to compose a wire-to-wire victory and propel him into the overall lead. Unfortunately for Goodchild – the first true British podium contender in the history of the race – he got shit out the back in the closing stages of this penultimate stage to finish a disappointing 29th, losing some 3 hours to overall leader le Cleac’h and all but ending his chances at a solid finish in the event.

After strong finishes in the first two legs and a commanding win in the third leg however, Frederic Duthil has unexpectedly moved into second place overall, and sits just ten minutes behind overall leader Armel le Cleac’h on Banque Populaire. Headed into the final leg of this year’s Solitaire du Figaro, 23 year old Tom Laperche on Bretagne CMB Espoir is rounding out the provisional podium, just one hour off the pace, and further confirming his very solid results in this year’s Solitaire pre-season.
Irishman Tom Dolan currently sits in fifth overall and represents the best shot at a non-French sailor making the podium. The fourth and final stage of the 51st Solitaire du Figaro will take place this Friday and Saturday and is the shortest of the regatta at just 183 NM. Beginning and ending in Saint Nazaire, the finale will include a tour of several coastal islands, which should again be contested in more light air which has defined this edition of the race. – Ronnie Simpson.
editorSeptember 16, 2020
Leave a reply