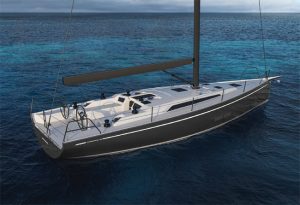 A new yacht launched by Grand Soleil is bound to generate a bit of a buzz. The Italian marque’s parent company Cantiere del Pardo has enjoyed a remarkable run of popularity and commercial success over the last six years, easily outpacing the market as a whole and steadily growing its revenue while some of its rivals have declined. The shipyard’s strategy boils down to releasing one new model a year, alternating between its two parallel ranges of yachts, the Long Cruise and Performance series.

This year’s launch of the Grand Soleil 44 Performance – announced back in January at Boot Düsseldorf and due to make its début at Cannes in September – has drawn more interest than usual because Matteo Polli is now involved. To back up the hype, it’s worth noting that even before the official announcement of the new model, half a dozen of these yachts were already sold off plan. Read on.

In But No Win