madman across the water 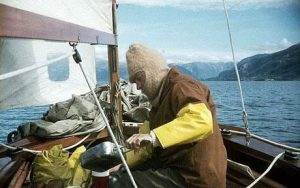 “A buoyant open boat, a good sea boat like the Wayfarer [designed in 1957 by Ian Proctor] is capable of cruising safely across open water. The principles of open water cruising are exactly the same as they have always been throughout the history of sailing – in bad weather always make sure that you have plenty of sea room and never get caught on a lee shore.

I grew up in awe of the sea which has never left me. It can be kind, tolerant, beautiful even generous, frightening, majestic and terrifying. It is totally uncaring. It should never be taken lightly. It reminds me of the courtier who, after each audience with the Great and Powerful Majesty, frequently checked that his head was still on his shoulders.”

(Frank Dye, the “madman of the Atlantic”, was one of those indomitable Englishmen who seem to derive a sense of satisfaction, even pleasure, from self-imposed discomfort and danger. In his 16-foot open boat Wanderer he made a succession of harrowing passages across the North Sea from Scotland to Iceland and Norway. He died in 2010.)  Frank Dye – Ocean Crossing Wayfarer (1977).