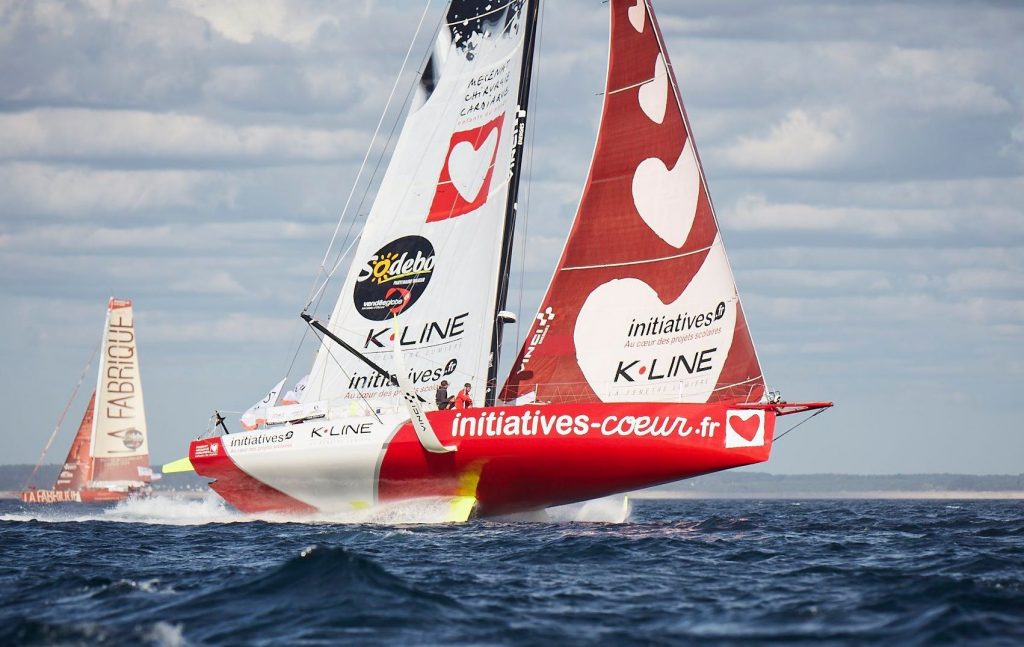 The 48-hour solo speed test for the Defi Azimut has just come to a close, and it features a podium 2/3 full of women with another woman in fourth! The final race before the Vendée Globe in November, this 500 mile triangle course validated performance improvements and repairs for many, while also confirming other challengers come November. Though nearly half of the Vendée Globe’s massive 33 boat fleet chose to sit this one out – with some very heavy hitters notably absent (Hugo Boss, Corum) – the 17 boats present created some ultra close racing before a park-up near the finish completely reshuffled the rankings.

Very notable during the race was the speed of Sebastien Simon on the Juan K designed Arkea Paprec and Armel Tripon on the Sam Manuard designed L’Occitane en Provence. Competing against the other fleet front runners – all on VPLP designs – Simon and Tripon were oftentimes the fastest boats in the fleet; surely good news for the pair of boats that had to drop out with damage in the early stages of July’s Vendée – Arctique race to Iceland and back. Had it not been for a major late-race parking lot and re-organization of the rankings, it had previously been a five boat contest between Charal, Apivia and LinkedOut with newcomers Arkea Paprec and L’Occitane en Provence.

Just like in last year’s Defi Azimut and in July’s recent Vendée – Arctique however, it was Jeremie Beyou onboard Charal who claimed the top spot, though in a nail biter with Samantha Davies on Initiatives-Couer (pictured above) less than three minutes astern. Since a major re-fit last year, Davies has been extremely quick in her 2010 VPLP boat, which has been turboed into a monster. Sporting some of the biggest and most powerful foils in the fleet and a grandfathered-in new rig that allows for even more righting moment and reliability than the one-design masts of the new boats, Sam has shown impressive pace since delaminating her boat two years ago and going back into the shed.

No less impressive were the two women that finished third and fourth; Isabelle Joschke on MACSF and Clarisse Cremer on Banque Populaire X. For Joschke – the first female to ever win a stage in the Solitaire du Figaro – this podium spot is surely sweet redemption after a broken boom de-railed an otherwise stellar performance in the Vendée – Arctique. Sailing the old Safran, modified with quite conventional foils, Joschke represents a serious wildcard that could do well in all conditions. And for Clarisse Cremer, she not only finished fourth but was the top non-foiler in the race on a boat with a very impressive pedigree.

A pretty awesome display of girl power on the same day that longtime SA friend Lia Ditton completed her epic row into Hawaii to claim a new women’s record for the journey! – Ronnie Simpson.