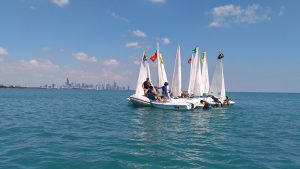 Choosing between summer camp or sailing school during junior high, Karen Harris opted for water. A Hyde Park native who attended St. Ignatius High School, she was on the sailing team at Princeton University and has been involved with the sport on several levels.

A longtime member of the Jackson Park Yacht Club and recent Commodore, Harris wanted Chicago youths to experience the joy of sailing. “We have 800,000, many of them low-income youths of color, that don’t get on the water,” said Harris, who owns a 25-foot O’Day. “We wanted to give youths an opportunity to learn how to sail as a way to teach life skills, teamwork, cooperation, leadership, resiliency, staying the course in school when the road gets rocky and doing your homework.”

Beginning in 2018, the program continues to expand. There were 130 kids for the first year, 180 last year and over 200 this summer. They have three two-week programs for students eight-eighteen years old. August 28 was the last day of camp. “I knew there would be a big demand, but it’s grown faster than expected,” said Harris. “I hope the kids will be able to stay with it after high school.”

There’s a waiting list for next year. Roughly half the students are male and female. Half of those participating are on scholarship and 75 percent are African American. There’s a group of ten kids from Englewood.

Mastering the sailing basics is important, but offering a comfort zone is also critical with 70 percent getting on a boat for the first time. Many having never seen Lake Michigan. About ten percent get nervous for the capsizing drill the first day. A clinical sports psychologist is available for those who need an assist. One percent figure out the sport is not for them.

Kids age 7-10 are put on a bug boat which is 100 pounds, smaller kids 11-14 can use the RS Feva and high school sailors can start on the 420s. The head instructor is Paul Staley. Johnny Mercer, Director of Youth Sailing, grew up sailing in northern England on the North Sea. They oversee a staff of four and four instructors in training.

“I worked with at-risk kids in England so there are some parallels,” said Mercer. “We have kids write poems about their experience. We teach kids about Langston Hughes.

“Initially, a lot of kids are nervous about capsizing. Then, all they want to do is capsize. The great thing about sailing is it encourages them to become leaders. If you want to diversify the sport, you have to develop sailors and give an opportunity to get them on the water. The kids who are dedicated are able to become instructors.”

The Jackson Park Yacht Club harbor has ample room to sail with shelter from heavy winds. After two weeks, they will sail to Hyde Park and have a picnic. Eli Sveen-Earling, a junior at U-High High School, started as a camper three years ago and is now an instructor.

“I spent ten weeks of sailing last year helping instructors and managing kids,” he said. “I like the interaction you have with the campers; teaching how to handle and maneuver the boat. Most have a decent grasp of the fundamentals after a week and make pretty good progress in two weeks.”

Destiny Simpson, a resident of South Shore and junior at Dyett High School, has developed an affection for the sport.

“The first day, I didn’t understand how to control boat,” said Simpson. “I wasn’t paying attention to the Telltales or focused on wind direction. I kept going into irons. The instructor got into the boat and showed me how to read the Telltales and how to trim the sails. I was skippering after four days.

“We went outside the harbor on the fifth day and sailed to Hyde Park. I got to skipper and crew and that was really exciting. There was about eight knots of wind so it was perfect. The more I sailed outside the harbor, the more confident I became. I can’t wait to sail more.”  – Seth Schwartz

got off your asses and get offshore

On Board, Seven & Seven