oh that’s what it is 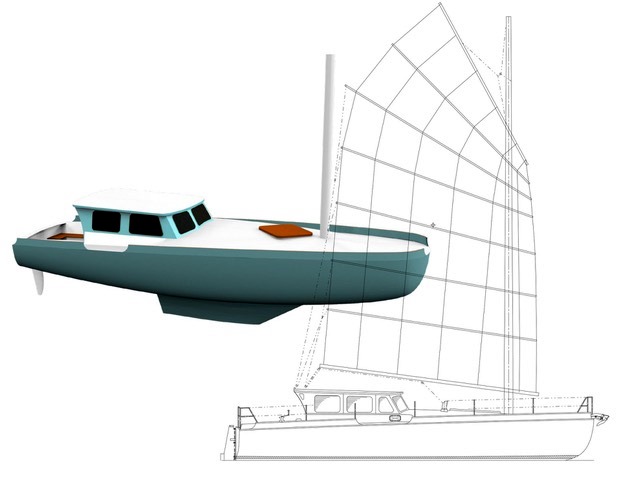 A few days ago, the Editor posted a ‘What is it?’ photo on the front page that piqued my curiosity. I looked at is closely and had a good idea that it was a new build under construction for my buddy Barry in Maui. Sure enough, I clicked on the link for the SA Forum thread and it was indeed Barry’s new boat. Now, for those of you who don’t know Barry Spanier, here’s a brief run down.

Many years ago, Barry built a ferro-cement Ingrid 38 in the Bay Area and then sailed it to the South Pacific. Becoming close friends in Tahiti with Bernard Moitessier himself, Barry continued his journey until New Zealand when an unfortunate crew error put the boat on the bricks.

Broke and homeless, Barry flew to Maui and began building sails for boats before moving into Maui’s burgeoning windsurfing industry and completely changing the game. As a designer, Barry won World Championships, set records, set new industry standards, you name it; complete legend status. Now, he’s that nice guy up on the hill, full of knowledge and aloha, who owns a sail loft in Lahaina and has a Westsail 42 in the harbor. He’s got a million good stories and even more new ideas.

I’ve gotten to know Barry over the years, and last time I was in his loft – about three years ago – he was showing me early renderings of a super unique scow-bow cruising boat with a junk rig. Lo and behold, a few years later I see that hull on the front page of Sailing Anarchy and I had to call old Uncle Barry and figure out more.

Sailing Anarchy: So what’s up with the scow bow? I mean, I dig scows, but what inspired that?

Barry Spanier: I was in Tahiti (back in the ‘70s) with my boat anchored in the lagoon, and I was working in a little yellow house building a set of sails for a big Alden yawl named Jada. Patrick and I wanted to build a boat that didn’t have any metal in it, so I knew I wanted a free-standing rig. We both agreed that a Chinese junk rig bow was better. I had all of these ideas about my dream boat, and sketched them out.

SA: What spawned the new build?

BS: After decades of insane work in the windsurfing industry and everything else, we didn’t sail much on boats. We went windsurfing every day instead. So about 5-6 years ago, my wife and best friend Samantha said, ‘Hey, do you want to build a boat?’ And I had all of these old drawings from Tahiti, and they were pretty similar to what we are building today…

SA: How did you come up with this design and did anyone help you?

BS: I felt confident that I could draw a boat. So I drew a boat and it was pretty close to what I wanted, and very close to that first boat I drew up back in the ‘70s. I asked a bunch of people to design it. Tom Wylie laughed me off the mat. We’re old friends, but he said ‘no way’. I had been to Jim Antrim a couple of times. So I asked him to meet up with me and have a few beers, and he agreed to give it a go. And so that started a couple of years of back and forth. He’d draw stuff and say yes or no, and then i’d sketch stuff and send it back. I kept telling him I wanted it as simple as possible. I had created a design brief like you would if you were about to go into production with something. ‘I wanted it this wide and long and this deep, and this much ballast, etc’.

SA: How was it drawing a scow bow?

BS: When he (Jim Antrim) first started to try drawing the hull, he couldn’t get his automated software to work because it wanted to put a point on the bow. The hull shape kind of evolved, and then there were chines and then not, and it was very much a creative process. But as it got more solid, and there was a rig drawn and a keel, I just kind of left him alone for a few months and it’s Jim Antrim all the way. As much as my ideas are in there, and Samantha’s are in there too, it’s a Jim Antrim design. He made something that could have been really ugly possibly even look good. (Laughs)

SA: So tell us about the boat being built

BS: It’s 42 feet on deck and it’s 14 feet max beam. The transom is about 12 feet wide, and the bow is 8 feet wide, about 2 feet back from the bow. So it’s pretty rounded and it quickly works it’s way into what I call ‘Parallel waterlines’. It’s actually like a mono-maran. I owned a catamaran that was barely wider.

It has a 4 foot draft, but it has a center board that is aft of the lead. Going upwind, it will draw 8 feet with the  board down, so it should give you some good anti-slip going sideways. But you see what’s being done with the Mini’s and the Class 40’s, and the scow bow is just super fast when downwind and reaching. Perhaps even sometimes faster than I will want to go!

The deck has a 4-foot square cargo hatch so that you can get a motorcycle in, or bicycles, or surf boards, or sacks of coffee or pigs for that matter, I don’t care what, but you could get it down that hatch. The doghouse has a sideways sliding door to get in. I’m 74 and my wife is 71. We want to keep sailing and we want it to be as easy and comfortable as possible. We wanted the boat to be something that you don’t have to climb down a companionway ladder. A lot of the design is about being able to handle the boat shorthanded. Being able to handle the sail easily, getting in and out easily, and a lot of it is about being able to manage the boat easily. It’s definitely oriented around mobility issues but they still want to keep on sailing.

SA: And the junk rig you’ve decided to go with?

BS: The mast weighs 200 pounds, with about 50 of that below-deck. It’s 100% carbon, and I want to paint it with fake wood and make it look like an old tree. There’s no rigging, no chainplates, no turn buckles, no pins, no nothing. I call it a low tension rig, because when you’re sailing on a boat with wires and pins and everything else, you’re always thinking that the rig is going to come down. I just like the idea of simple, like how can you make it more simple? Simple is cheap. When you’re rich you can afford to be eccentric, when you’re poor you’re just weird.

The sail is going to be made from Hydranet which is super strong for it’s weight and has great tear strength. The battens are 100% carbon, but i’m not going to use them flat. I’m devising a means of putting them on horizontally. But they might still bend a bit. I want some camber. Because I can control the twist of the sail by sheeting it from the leech, you should be able to get a pretty effective angle of attack the whole time. You should be able to have the entire leech powered. That’s very efficient in any kind of sail, its very difficult to do that in a normal rig you have to have a lot of vangs and preventers and things that allow you to sheet your main sail where the top of the sail is sheeted properly and that’s only if you have a full battened main with a big, roachy head.

I built some shape into the sail, enough to put tension on the edges. The rest of the shape I intend to get by having the right kind of battens. The bottom ones are going to be softer and then the top ones are going to be stiffer and stiffer. There’s not going to be any camber panels, it’s just going to be flat. You can generate a lot of power with a flat thing; as long as you can control it, it can be really powerful. It doesn’t have the same characteristics as a deep foil, but it can still be powerful.

The lower portions will just be reefed away pretty quick, especially going upwind. I’m building the bow pulpit strong enough to support a kite. I’m building a 22 meter kite that sheets about a hundred feet up.

SA: How close is the boat to being complete? When will it launch?

BS: My wife wants November, but i’m not sure about that. There’s not much to do now, they’re at the point where they’re longboarding the bottom and then it’s not long until it’s in the water. But there’s no point in rushing anything. The rigging should only take a day.

I want to put the rig in the boat and get the basics installed and then sail it out here (to Maui). By the time I leave Berkeley, i’m going to have all the solar hooked up. I want all the plumbing and electrical to work. But down below doesn’t need to be trimmed or finished. I just want to get the boat over here, where I have the ability to finish it off myself.

I’ve been involved with building this boat and i’ve been grinding, and longboarding and gooping and… it makes me feel really good. I got kicked out of it by this inability to travel. When I go over there, the goal is to get it ready to sail. A couple of day sails and then head out there and turn left. No stops, no nothing.

BS: Once I finish the boat off completely, we’re off to the Tuamotus and then towards Australia.

Best of luck Barry and Samantha! Enjoy the new boat and I hope to see you in Fiji