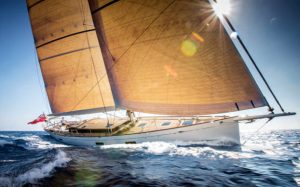 To see Performance Classic Yachts’ PC66 as an elegant, sedate, traditionally styled cruiser may be an accurate first impression, but it would also be to seriously underestimate this yacht’s true capabilities.

From the plumb bow and fixed bowsprit alone it is easy to see the design influence of traditional pilot cutters and the smacks of the 19th century. But as your eyes are drawn aft to the angular style of the superstructure, be it either the deckhouse or the flush deck version, along with the long sweeping overhang and the counter stern, each provides subtly different classic details to form an impressive and striking overall appearance that is greater than the sum of the parts. And yet this is a design that is about far more than just looks.