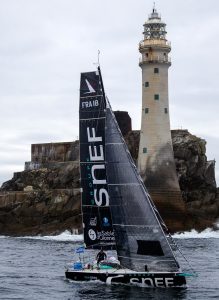 The 35 Beneteau Figaro III’s competing in the 1st leg of La Solitaire du Figaro are now on the home stretch back to Brittany after rounding Fastnet Rock in light breeze yesterday. Reaching back to France in moderate southerlies that should go aft, the fleet is now locked into a 300 mile drag race to the finish. Groupe SNEF skippered by Xavier Macire is still at the head of the fleet and pushing hard to win the first stage of his career, but as this class is perhaps most famous for, we all know that no lead is safe and boats will likely be overlapped approaching the line.

As is usually the case in sailing, the cream has again risen to the top of the fleet however. A light air start made it a crap shoot and shit some heavy hitters out the back in the early stages of the race. After a northerly routing option left him hung out to dry early, current Vendée Globe champ and two-time Solitaire champion Armel le’Cleach on Banque Populaire has managed to erase a 22nd place start and a 20 mile deficit to round Fastnet Rock in second place behind Groupe SNEF.

Le Cleac’h – whose nickname is The Jackal for good reason – is sailing in fourth place as of this writing and is still well in contention. This crafty veteran can still pull off any number of tricks, though he’ll have his hands full with many usual suspects in this star-studded fleet.

Sam Goodchild onboard Leyton continues to back up all the hype and is sailing in 10th place as of this writing. Constantly moving forward and still in contention for this opening stage, Goodchild is trying to make good on his bid to become the first non-French sailor to win a stage of La Solitaire since Irishman Damian Foxall won one in 1998.

Making major waves in the class after winning the Drheam Cup last month, nobody is counting Goodchild and Leyton out; on this stage or any other. Fellow Englishman Phil Sharp is putting in a commendable effort in 17th place and 2nd Brit as of this writing, though he’s fallen off the lead group in this opening stage. Like Goodchild however, many will be looking to Sharp for some flashes of British brilliance in the later stages of La Solitaire.

As the fleet moves east back to Brittany, the breeze should continue to follow them and potentially increase while moving aft. In other words, picture perfect conditions to – in typical Figaro style – compress the fleet as it approaches the finish. Don’t snooze or you’ll miss it, the best time of year to watch really close offshore racing is upon us. Track the fleet here. – Ronnie Simpson.