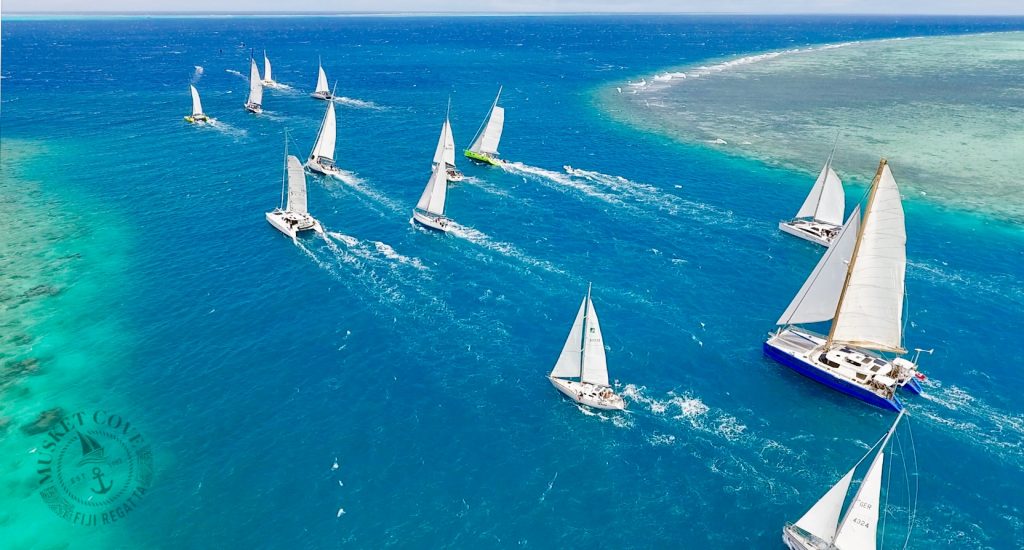 As regattas around the world continue to get cancelled, or at least altered beyond recognition by international and state border closures, there is one seemingly magical place in the South Pacific where the COVID 19 virus has been contained and a proper international regatta can still take place; Fiji. “With the ‘Blue Lane Initiative” and the other great measures taken by the Fijian government, we are so fortunate to once again be able to attract an international fleet of yachts and sailors”, says Will Moffat of Musket Cove Resort. “

For us, it was really important to be able to continue the long tradition of holding an international regatta at Musket Cove. This is our 37th regatta, and with 2020 marking the 50th anniversary of Fiji’s independence and also the 40th anniversary of our Musket Cove Yacht Club, we’re really honored and privileged to be able to be a part of that and keep the tradition alive, even during these difficult times.”

At Musket Cove, being a haven for international yachts isn’t just marketing hyperbole, it’s in the very DNA of the resort itself. Founded by yachtsman Dick Smith, the boating and sailing connection is very much alive to this day. Hell, the director of the resort is a former spar maker and pro sailor from New Zealand who worked for Southern Spars and even built rigs for America’s Cup teams in Europe.

Since Fiji announced their ‘Blue Lanes Initiative’ in late June and opened the maritime border in mid-July, more than 70 yachts have safely entered the country while Fiji has managed to continue it’s more than four month long streak of having zero confirmed cases of COVID in the community.

Naval patrols are keeping close tabs on the boats still in quarantine while returning citizens are held under lock and key by military personnel to avoid quarantine breaches. One may argue that the response has been a bit totalitarian, but when compared to the Australian model of hotel rent-a-cops fucking the guests in quarantine and bringing about a second wave that has shut down the country and threatens ‘The Great Race’ itself, no one’s making too much of a fuss.

Between October 9 and 12, an estimated 60 boats and crews will participate in four days of big boat racing, Hobie Cat match racing, downwind SUP racing, kiteboarding and more, with the always stellar night life and parties still a major part of the event. Every sailor who re-enters the country by boat (which now numbers several hundred) has taken a COVID test before their departure for Fiji and has endured a quarantine-at-sea before taking another COVID test upon arrival.

Anyone who had a passage less than 14 days is again required to quarantine at anchor with Big Brother keeping a close eye on your adherence to the government’s rules. As a recent immigrant from Donald Trump’s America to Voreqe Bainimarama’s Fiji, i’m 100% down to play by Uncle’s rules if it means we can still go yacht racing in a pandemic.

While we may be living in a COVID paradise, that’s not to say the virus will have no impact on the regatta. As well as every foreigner or returning citizen being thoroughly tested, quarantined and vetted, the regatta will adhere to every single protocol instituted by the government. All participants will be required to install and use the ‘Care Fiji’ contact-tracing app to their phones, while temperatures and symptoms will be checked by a registered nurse before entering our isolated island bubble.

As well, all events will be held outdoors in open air venues and sanitation stations will be provided throughout the event. Just because the virus isn’t physically in the community doesn’t mean that we are getting complacent. As the rest of the world has shown us, it only takes one slip up for us to become the next hot spot.

As for the boats and sailors that are present, the fleet will undoubtedly be a bit smaller than in recent years past where the regatta has begun to attract triple-digit entries, including some incredibly cool hardware and top-tier talent. In my first year sailing the regatta – 2014 – I was onboard a fast Gunboat 52 that was racing boat for boat around the island with other very fast cruising boats, many of which had some big name pro sailors onboard.

Last year, an all-carbon 53-foot Finot Conq from Germany battled for monohull line honors with a former Vendée Globe IMOCA 60 that had been lengthened to 66 feet, while a fast Schionning cat from Tasmania edged out a quick little 8.5 Meter racing cat that lives here in Fiji. In the Hobie Cat match racing, Rod and Kerry Waterhouse of Sydney – parents to Olympic sailor and Sail GP stud Jason Waterhouse – took down an F18 Australian National Champion and a handful other hot shot sailors to win the Hobie Cat Challenge. In fact, son Jason’s first-ever sailing race would have been the Fiji Regatta back in the ‘90s. A cruising regatta it may be, but a boring procession of poorly sailed boats it ain’t.

Whether you’re a low-key cruiser sailing your Westsail 32 with two reefs and a staysail set, or an America’s Cup vet sailing your Gunboat to the limit, the Fiji Regatta Week has a bit of something for everyone. With the harbor beginning to fill up with a nice mix of new performance oriented monohulls and big fast cruising cats – with some very quick local racing multi’s and mono’s committed as well – the regatta should be as good as ever, regardless of the slightly compressed fleet size. As any bloke in the pub at last call will tell you, it’s not the size that matters, after all.

My media work at the Pacific Cup, Sydney-Hobart and Vendée Globe all got COVIDed this year, so words can’t describe how stoked and grateful I am to be surfing world class waves in Fiji and prepping for my third Fiji Regatta Week at Musket Cove, in just a month’s time. October 9-12 can’t get here soon enough. For more info or any inquiries into the regatta, feel free to drop a line to the yacht club at [email protected].

wheeler off the bus