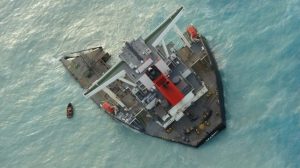 On Saturday, thousands of citizens of the Indian Ocean island nation of Mauritius went out into the streets to protest their government’s response to the fuel spill from the bulker Wakashio, which went aground and broke up on a reef off Mahebourg earlier this month.

At least 200,000 gallons of bunker fuel were released into the marine environment as a result of the casualty, and much of it washed into a coral lagoon surrounding Île aux Aigrettes, a popular nature reserve and tourist destination. Since the grounding, nearly 40 dolphins have washed up dead on the shoreline north of the wreck site, sparking concerns that the pollution could be negatively affecting marine life.

on the water, virtually

beat on the brat