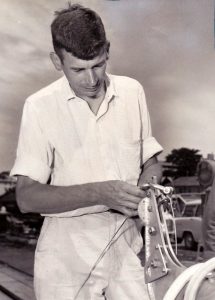 “I went to work for Alan in mid-1956. It is difficult to describe the atmosphere in Alan’s ‘office’ in those days. The office was actually one room of his living quarters – the back half of a cottage in Chatswood. Alan liked good music and good literature, particularly poetry. Morning tea would often be taken with a reading from Alice in Wonderland or something similar.

There was little in the way of formal plan or document storage. Into all of this, each working day, would step Alan’s father, Captain Payne, Master Mariner, retired from a life at sea. He would arrive wearing a bowler hat and carrying a briefcase with sandwiches and a newspaper in it. He would attempt to tidy the place up, mop the floor, make cups of tea and be generally useful. It was a tough job because there was so much going on.”  –  – Warwick Hood – Alan Payne: A Memoir (1995)

(Payne’s influence on sailing and naval architecture in post-WWII Australia was immense. He designed the Payne-Mortlock canoe, the champion offshore racers Nocturne and Solo, the Tasman Seabird class and such enduring classics as Fare Thee Well and Karalee. His innovative design work on the 12-metres Gretel and Gretel II laid the foundations for Australia’s eventual triumph in the 1983 America’s Cup.)

reelin' in the years